The Milk Carton Kids bring us the kind of music that is pure and honest, stripped down and simple. The kind of music that sounds just as beautiful, if not more, when played live as it does on their records. I had the absolute pleasure of catching their show at Zoey’s in Ventura on Friday and was left with such respect for their musicality and songwriting. They had the room speechless, dead silent, staring back at them eagerly. It’s not that they present something completely unique or unheard of, it’s the sincerity with which they write and perform each song that is so remarkable. Each harmony is spot on, each guitar line complements the melody beautifully, and each lyric feels genuine. The show was a much-needed escape into their world, full of stories and memories and regrets and dreams.

The simplicity of their music matched the simplicity of the room: small, dark, with just enough soft light to illuminate the two boys dressed in their Sunday best, suits and all. The sound was great, clear; you could hear every note, every syllable, even every breath. The room was packed, shoulder to shoulder, full of their family and friends (including both boys’ parents), as Zoey’s is one of their regular, hometown spots. They actually recorded their first live album there last year, and have been playing the venue once or twice a year for several years.

On stage, The Kids were at times quiet and humble, and at times completely ridiculous and brash. The two have such different, yet distinctive, stage personalities. They would clash at times, creating humorous tension and confusion. As Joey Ryan mumbled on about the naming of one of their songs Kenneth Pattengale jumped in with, “are you done, Joe?” Playfully sarcastic, that’s the name of their game.

They came to us somewhat less planned than usual, letting the night guide their set, changing around the set list. At one point Kenneth asked the audience how many people had never seen one of their shows. About half of the room raised their hands, to which Kenneth exclaimed, “well now you’re hip to the complete fucking mess that is our show.” But I found it refreshing, more organic. It wasn’t canned or pre-programmed. And even if the organization was a bit messy, the musicality of the two performers was not lacking for a note. 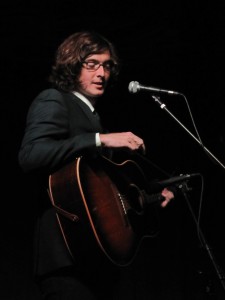 Their voices nicely complemented each other, Joey’s having more of a gravelly sound while Kenneth’s was much more pure. The same is true for their guitar playing; while Joey’s is simple and melodic, Kenneth’s traces its own melodic lines, creating a third voice in each song. While they played, Joey stood still, sometimes tapping his foot to the beat, while Kenneth squirmed and wiggled around as his fingers flew across the fretboard. Their contrasting personalities made for many funny moments, and as I said before, they like to poke fun at each other. In their second set, they tried out a few new, un-released songs with working titles. One, Joey announced, was named “Snake Eyes.” As soon as he’d said it he turned to Kenneth and asked why on earth he’d named it that. Kenneth came back saying that this seemed like a conversation they didn’t need to be having, but that “one of the lines in the song has the phrase ‘snake eyes’ so that seemed like reason enough.”

Their lyrics present things like life in their hometown of Los Angeles (“Broken Headlights”), many different thoughts on love, life from the perspective of a puppy (“Memoirs of an Owned Dog”), the hardships of being a musician (“Permanent”), and even a gorgeous song to a future daughter (“Charlie”). They have the ability to take your heart in their hands (cheesy, I know) with their lyrical sincerity and wit, and it was hard not to feel sadness, joy, confusion, and pride right along with them. It’s just relatable. Yes, I’m pretty sure I was the youngest person in the room, but their music and lyrics are not particularly aimed at one generation or another. Besides, they’re both in their 20s! Their music is feel-good music that soothes away a bad day, and everybody likes to be soothed sometimes. I’m sure of it.