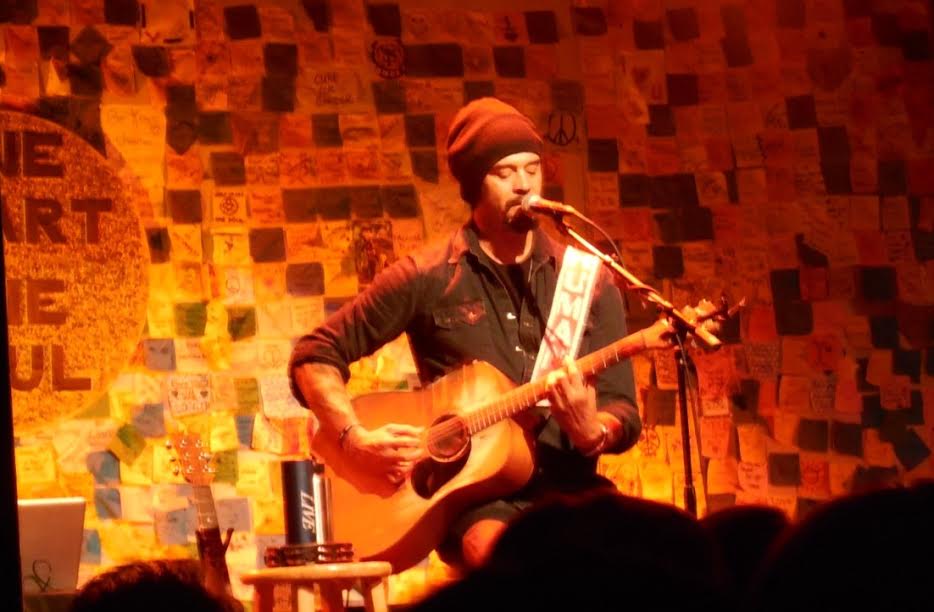 A night of Peace, Love and Harmony! These three words come perfectly to mind when describing the Michael Franti “One Heart One Soul” sold out acoustic show. I had the pleasure of seeing Michael Franti perform last week, November 19th at the Canyon Club in Agoura Hills, and such an intimate soulful evening it was.

To spark up the night, the very talented, young up and rising solo artist Ethan Tucker ignited the crowd. This talented singer-songwriter based out of Seattle has just released his new EP, Acoustic in LA. His songs are self-written about his life on the road, experiences with the ladies and his search for true love.  His sound has a wide range and has a hint of Bruno Mars, he truly is charismatic. Ethan’s acoustic cover of Sting’s “Roxanne” was a jaw dropping hit with the crowd and only left us wanting more. Keep a look out for Ethan Tucker. Big things are in store for him!

Michael Franti took to stage a little after nine and we were immediately pulled in by his positive, peaceful, uplifting vibe. The acoustic trio of Michael Franti on vocals and acoustic guitar, Carl Young on keyboards and bass and Jay ‘Boogie” Bones on lead guitar, have a noticeable bond and chemistry and they mesh beautifully.

Franti writes the lyrics to all of his songs, and before brea 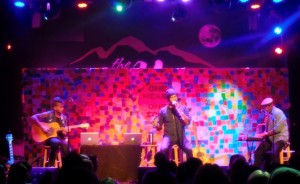 king into each song he shared with us the short stories behind how each song came to be, the inspiration behind the lyrics, and his writing process. Franti interacted so closely with his audience, giving the show a very “Unplugged” feeling to it.

The stage had a unique design as well, with a very large backdrop completely filled with colorful post-its. Prior to the show, a booth was set up front and center to the stage where fans were welcome to write notes on post-its — messages of well wishes, humor, love notes, peace and unity — that were all plastered on the backdrop before the show began. Fun fact, the title of this Acoustic tour was chosen from a fan.

The show was an elegant sit down three-course dinner, but by the time Franti took to stage everyone was standing, cheering, singing along, and even dancing along the isles for the more upbeat tunes, and it became one big party.

Mid-way through the set Franti paused and heartfully shared with us the details of his nonprofit organization he started with his partner, Sara, called Do it For the Love Foundation, which provides people with terminal illnesses opportunities to see live concerts and meet their favorite artists. In a very tender moment he then dedicated “Life is Better With You,” to Sara, who was actually in attendance and joined him later on stage to dance for the finale of the show.

For nearly two hours Franti had the crowd cheering and dancing with his unique tunes that ranged from rock, reggae, little bit of hip-hop, some disco funk and most of all, joy. A favorite highlight of mine included a soulful rendition of Bruce Springsteen’s “I’m on Fire”.

Performing his socially conscious hits, Michael Franti writes about peace, positivity, love, his personal experiences and a tender ode to his son. His set included fan favorites such as:  “Oh my God”, “The Sound of Sunshine” and “I’ve Got Love for You”.  Jay Bones rocked the house with several amazing guitar solos, and Carl Young had an exceptionally eye opening solo not only on keyboards and bass, but also the flute. Their full musical talent was on display at the Canyon Club this night!

Closing out the set, Franti strategically saved the best for last with his greatest hit “Hey I love you”. In a hilarious moment he told the story of how the song was inspired and created in the powder room of actor/friend Woody Harrelson’s home, as Michael was taking a shower and wrote the lyrics that came to mind on the steamed glass shower doors and mirrors. For this final song Franti invited the crowd, as many could fit, to assist him with singing along and dancing on-stage. Once the show was nearing the end, he took his sweet time to hug and shake hands of nearly everyone that was on stage and take photos with all the fans he encountered, all while dancing with the crowd.

Franti kept the energy alive throughout the entire show. Uniting everyone with the love of music, his messages about peace, love and harmony, inspired us all, even if it’s just for the night, that the world can be a better place as one big love and peace fest. His motto in life: Be your Best, serve your greater good, and rock out wherever you are. I think he has successfully lived up to it. What an uplifting ray of light show this was!