Man was Friday night a trip. From the greased hair, to the vintage dresses, to the authentically retro rock ‘n’ roll sounds of JD and his two opening acts, The Far West and Omar & the Stringpoppers, it actually felt like travelling back in time. Omar & the Stringpoppers warmed us up with some classic rockabilly that hit that 1956 sweet spot I’ve only heard on records. The Far West followed with their own brand of retro sounds, that was, in their own words “a little bit of rockabilly, and a little bit of country.” They even threw in a Townes Van Zandt cover at the end of their set for good measure. Lead singer, Lee Briante, made a point to praise the night’s bill several times, and all us fans for coming, declaring, “y’all have very good taste, you should be pleased with yourselves.” Check out the rest of the review after the jump!

To cheers, and an unusually long pre-set sound check that helped build the anticipation, JD McPherson and his band brought their retro rock ‘n’ roll, R&B sound onto the stage. Fresh off their June 6 appearance on Conan they sounded incredible! The band featured solid keyboard playing, a stellar drummer, fantastic sax solos (that were always met with loud cheers), and an upright bass player by the name of Jimmy Sutton who, for a few songs, even stole the show. JD featured Jimmy on several tunes, giving him a long bass solo and even having him sing lead on a couple of songs, including a Bo Diddley cover.

Briante, of the Far West, pointed out all of the good hair in the room as he came out on stage. And he wasn’t just talking about the musicians (many of whom had hairstyles and clothes that were reminiscent of 1950s performers’). Surrounding me in the crowd there were men and women of all ages, and of several generations, also decked out in 50s attire from greased head to pointed toe. The room was stuffed to the brim, people were shoulder to shoulder, but they were dancing, swaying, and cheering along to the music, riding the sounds back to an earlier era. JD called out that we were a “fine lookin’ bunch of sardines,” as he himself danced and jumped around up on stage. 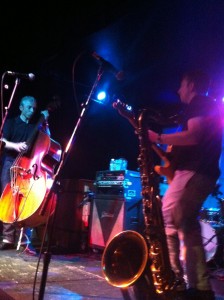 Unfortunately, the night was riddled with technical difficulties, starting with a dramatic “pop” during Omar and the Stringpoppers’ set as the upright bass actually broke. And, although they sound checked for a long time before JD’s set, his monitors weren’t working and loud feedback sliced through the room a few times. Nevertheless, he and his band members were able to work around the problems and play a phenomenal set of music. In fact, despite all the glitches, JD seemed extremely comfortable up on stage, dancing, literally jumping up and down, and shouting out to the crowd to sing along. But for all his energy on the upbeat songs, he could just as naturally slide into a more somber tune and find his serious side, as in one of the best songs of the night “Signs & Signifiers,” the title track off his record.

Of course, when the band started to play their single “North Side Gal,” everyone sang along and the room began to shake to the rhythm of our dance steps. The boys also showed off a different side during their encore as they played the Jamaican ska tune “Oil In My Lamp,” which they just recorded for the Daytrotter Sessions. Frankly, it really wouldn’t have mattered if this was your first time hearing their music or if you had every one of their songs memorized. It was an all around good time, and a night of phenomenal musicality. JD was equally grateful as he left the stage: “I want to thank each and every one of you. First time in LA and we got a packed house folks. Unbelievable.” Is it so hard to believe that rock ‘n’ roll is back?