Always say two positive things before laying down the critique.  I learned that in a class.  Grimes has some fairly unique and effective stage presence.  A kind of oddly adorable misfit quality that can really draw you into the music.  At times.  She’s also got a pretty great handle on multitasking.  She sings, loops her own voice, blends it with some beats and bass and ethereal synths, then sings some more on top of the mix.  I can appreciate the effort involved.  And she manages to come out sounding quite lovely.  At times.

But more to the point… her act is rather underdeveloped.  To say the least.  I’m not sure that she’s got a real solid idea of the type of aesthetic she’s trying to establish. 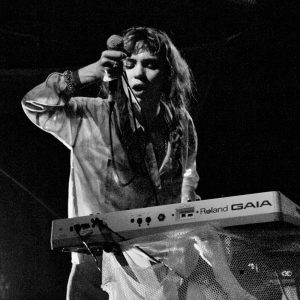 Dollar store production design.  No real lighting to speak of.  And she mistakenly chooses to share the stage with her opening acts, who add nothing but a rather obnoxious distraction:  Two twitchy girls draped in plastic who may or may not be playing synthesizers as they flail and convulse through some sort of interpretive dance routine [MYTHS].  And a rather mopey fellow in a hooded camo coaches jacket who does nothing.  He doesn’t sing.  He doesn’t dance.  He just sort of walks about the stage.  Periodically comforting himself by hugging one of the various stuffed animals that are lovingly tucked amongst the monitors [Elite Gymnastics]. 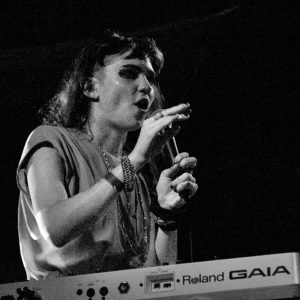 The quality of the music itself wasn’t much better.  A fairly underwhelming live interpretation of studio work that I actually find quite interesting.  A poor mix could have been blamed for a certain degree of this, but not all of it.  Her voice was lacking in comparison to its album incarnation.  Many songs sounded rushed.  And although she managed to elicit genuine emotional response with tracks like Genesis and Oblivion, a lot of her effort fell flat for folks who weren’t already committed fans.  Or who weren’t particularly drunk.  It didn’t help that she clearly seemed [and admitted] to be the latter.

I sincerely hope that she ups her game the next go around.  Her albums give the impression of somebody who can do better.

This author hasn't written their bio yet.
Colin has contributed 4 entries to our website, so far.View entries by Colin