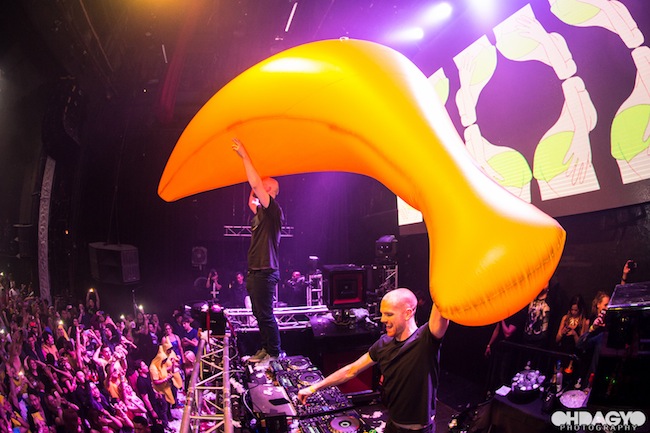 This past weekend was billed as Super Bowl weekend across the country, but if you were at the Dada Life show on Friday at the Avalon in Hollywood, it would be more appropriate to call your festivities Dada Bowl.  While the Super Bowl excitement was pretty much over an hour into the game, the party that Dada Life threw on Friday at the 5 year anniversary of CONTROL (the Friday night party at Avalon) packed all the excitement you possibly could want into a two hour set.  If you were lucky enough to attend this sold out show (tickets were gone on the same day they went on sale months ago) then you got to experience the biggest party in Los Angeles this weekend.  If you missed out, don’t worry, we got enough instant replay for you right here to enjoy the highlights!

You know that an EDM artist has started to cross over into the mainstream of music culture when they are being interview in Los Angeles by the famous Kevin and Bean.  The icon radio personalities are better known for interviewing the likes of Trent Reznor, Muse and Kanye West for the Los Angeles radio station KROQ.  But this past week it was the Swedish DJ duo of Olle Corneer and Stefan Engblom, better known as Dada Life, that was getting the air time with Kevin and Bean.  It’s fair to say that Dada Life is a pretty big deal in these parts.  Following their interview with Kevin and Bean, it was time for the real event at Avalon.  The show had been sold out for months, billed as Dada Life’s return to Avalon for the CONTROL 5 year anniversary party.  The truth was that this was way more than just the anniversary of the Friday CONTROL party, it was the return of Dada Life to the Avalon.  You know, the venue and location that was shut down by police in riot gear on November 6th, 2010 for Dada Life’s last show at the Hollywood nightclub.  This was the return of Dada Life to the Avalon, and it was simply the biggest party in LA on what is always a huge party weekend in the USA. 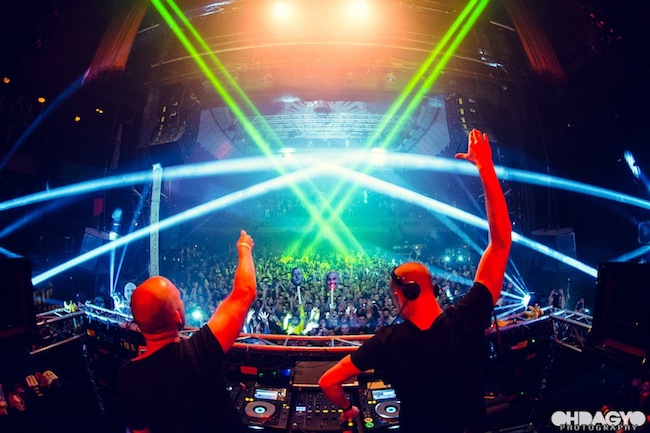 Henry Fong deserves credit for a perfect opening set to bring Dada Life to the stage.  Electro heavy music that mixed classic rock with fast hitting beats.  The crowd was dancing from beginning to end with Henry Fong on stage, and the dance floor that started pretty thin at 10:30 PM was at capacity with 30 minutes to go until Dada Life came on stage.  Good work by Fong who is known to always bring the heat during his sets.  A little past midnight though and the energy started to build to a new level.  There’s sort of this quiet moment before Dada Life comes on stage that overtakes the crowd.  Part of the reason is that the build up to Dada Life is something you can truly feel.  Dada Life is not a trance act, they are not there to take you up and down on a roller coaster of melodies.  Dada Life is fast paced electro house, big hook choruses, hit you in the face with a banana, soak you with champagne dance music- with a smile of course.  So it came to no surprise that the moment Dada Life took the stage it was a non-stop and over the top 2 hour party that left you wanting more even if you didn’t have the energy for it.

Dada Life ripped through many of their hits that have made them a favorite for festival goers and die hard fans over the years.  Staples such as “Rolling Stone T-Shirt” and “Kick Out The Epic Mother Fu**er” were met with fanatical response from the crowd.  Some of these fans dressed in full banana suits of course, others in club attire with traces of real banana now on their jeans and dresses.  Accompanying Dada Life through their manic set was their usual cartoon graphics and characters.  We’ve seen Dada Life perform with this visual LED show a few times this year, and we still can’t really tell what the hell is going on in these visuals.  That’s not a bad thing, it’s great actually!  Imagine raging with your friends while a sort-of bald gangster banana shoots a Tommy Gun at you from massive LED screens.  OK, don’t imagine, just go see Dada Life and you’ll get what we mean.

About an hour into the set Dada Life brought it down a notch, a moment we enjoyed as the pace was frenetic from the start.  While Olle and Stefan have more than enough sing-a-long singles to pack their set, they can get pretty hard and dark in an instant.  Using “This Machine Kills Ravers” as the middle of their heavy portion, it was one of the highlight tracks and runs of the night.  We really wanted to pick that as our favorite moment, but we have to be honest with ourselves here.   Very few songs in EDM can top the madness of “Born To Rage”.  There’s no doubt that this is the track that Dada Life is riding into new levels of stardom.  It appeared near the end of their set and it’s simply one of the best party club tracks out there right now.  Tailor made to increase the energy level through the roof with the chorus “U-S-A you were born to rage, so c’mon!”, the track almost ripped a whole in the Avalon ceiling- it’s that massive. 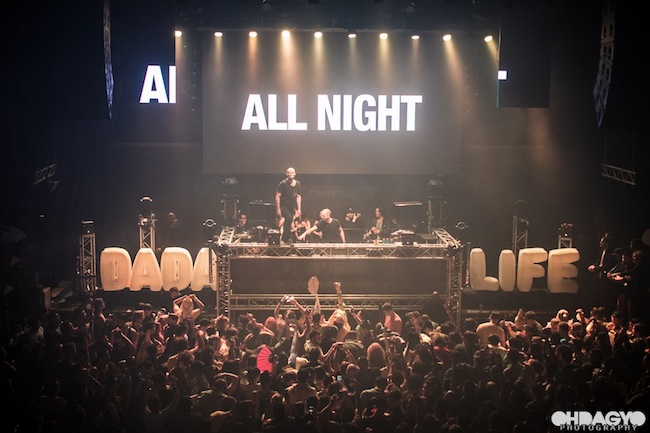 The show was filled with the usual Dada Life antics- a gigantic inflatable banana that seemed to fill up almost the whole room, twenty smaller inflatable bananas floating around the venue, “smile masks” for the crowd to wear, and the signature Dada Life “Happy Violence” pillow fight.  While those made it into the show, the real bananas and champagne showers were definitely missing.  We’ve seen Olle and Stefan use upwards of twenty bottles before during a champagne shower and throw out hundreds of real bananas.  There was one memorable shower on this night, but besides that the two spent most of the time working the decks.  For as fast and crazy as the set was, the two didn’t have a ton of time to get the crowd soaking wet.  We’re not sure how much more fun they could actually have packed into their two hour set because by the time they were done the crowd was sweating and exhausted.  This was an anniversary party that was worth attending and celebrating, and by far the most exciting event in Los Angeles, and even on TV, this weekend.

Congratulations to the Avalon and CONTROL for making Friday nights in Hollywood a home for dance music.  All photos were provided courtesy of Avalon Hollywood.