You have to hand it to Henry Rollins and Drop In The Bucket, the charitable organization building fresh water wells in Africa, for putting together last night’s unique experience.  Rollins told the crowd last night that when he picked up the phone to call Corey Taylor to ask him to be a part of this charitable event, Corey took all of 5 seconds to commit to the event and start planning his touring schedule around last night’s date.  Rollins also told the crowd that he would keep the guest musicians joining Corey on stage a secret until they came out.  With the likes of Dave Navarro in the building, it was hard to keep the lineup truly under wraps.  But one thing the crowd and those in attendance had no idea of was the set list that Corey and friends would play.  If you like the heavy classics, this was the show for you!

The night opened with one of our favorites Jesse Hughes performing as Boots Electric.  Always entertaining, never too serious, and a dancing machine, Boots Electric put on their classic rock show.  If you are not having a good time with Jesse on stage, you don’t enjoy rock n’ roll music the right way!  Mike Watt, bassist for the Iggy and Stooges reunion, and Kira Roessler who played in Black Flag performed a bass heavy set as the tandem called Dos.  With smiles and genuine love of music, the two put on a unique set that added to the variety of the night.

The true highlight of the night though was Corey Taylor and his performance with friends.  It wasn’t long ago Taylor was clad in leather masks with Slipknot, and if you haven’t seen Corey perform as Stone Sour or solo before then you were probably surprised by his friendly persona.  Corey was engaging the audience all night, constantly making sure the crowd was pleased with the heavy covers they ripped through song after song.  Taylor may have been serving to the fans, but he was quick to bring it back to his heavy roots once the songs began.  With Anthrax’s Scott Ian on guitar, and Slayer’s Dave Lombardo, the jam band opened with Calling Dr. Love from KISS.  In a surprise moment in the heavy set, Corey actually ripped into a Foo Fighter’s Everlong cover.  He even joked that the all-star cast of guitarists didn’t know how to play the song, so they had to call on the services of a sweater-vest wearing helping hand who knew the chords.  There were two AC/DC covers in the set as well, both of which got raucous reactions from the crowd.  Walk All Over You was performed with the fire and energy that Corey is known for, taking moments to headbang in between riffs.  My personal favorite from the night was the channeling of Layne Staley for a cover of Alice In Chain’s Would.  It was the perfect mix of the heavy sound that many of the musicians on stage have crafted over the years, with the familiar song that every fan of rock n’ roll wished they could still hear live in concert with regularity.  With Dave Navarro on stage now taking over guitar duties with John 5 of Rob Zombie lending the second guitar, the night’s most metal shredding moment occurred.  Watching Navarro and John 5 destroy Ozzy’s Crazy Train with even Corey staring in amazement was a highlight of the show.

A benefit show is only as good as the people who put it on.  From the beginning, it was clear that with Rollins at the helm of an event and charity he felt passionate about, the event was destined for success.  With an all-star cast rallying around the immense vocal range and positive energy exuding from Corey Taylor, last night’s concert event for Drop In The Bucket was a musical and charitable success. 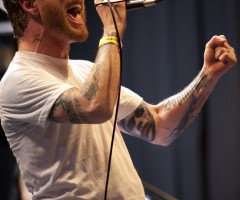 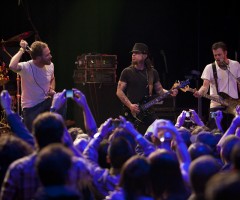 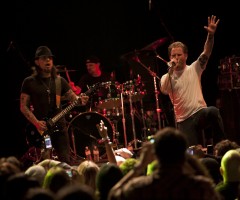 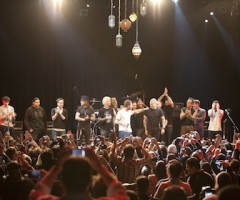 You Really Got Me (The Kinks)

Walk All Over You (AC/DC)

Would (Alice In Chains)

Heading Out To The Highway (Judas Priest)