The Great American Music Hall is a gorgeous, ornate venue that has hosted many great acts; turns out, it is also the perfect spot for a beautiful indie-folk show. Blind Pilot, of Portland, Oregon, first caught my attention in 2008, after Israel Nebeker and Ryan Dobrowski completed a West Coast tour from Bellingham, Washington, to San Diego, California, entirely on bicycles. Instruments, gear, and all. Seriously. The now-sextuplet has toured tirelessly since then, and their practice is evident in their captivating live performance. Gregory Alan Isakov, from Boulder, Colorado, is probably the perfect support for Blind Pilot. On Sunday night, fans at Great American Music Hall were treated to a special, solo set by Isakov. The stripped down, opening performance set the tone for a great evening of indie-folk music. Continue reading after the jump for a full review of Blind Pilot and Gregory Alan Isakov’s show!

Anytime you are at a show and think to yourself, “Man, this song right here is the highlight of the show” every few songs, you know you’re witnessing something magical. The Great American Music Hall usually boasts a lot of background chatter, but on Sunday night, the entire crowd was silently immersed in the performances of Gregory Alan Isakov and Blind Pilot.

Blind Pilot
Blind Pilot are currently touring to support their most recent full-length release, We Are The Tide. Since 2008, Israel Nebeker and Ryan Dobrowski added Luke Ydstie, Kati Claborn, Ian Krist, and Dave Jorgensen to the Blind Pilot line-up to create the full-bodied sextuplet that tours today. As it usually takes me many, many listens before I warm up to a new album, I am always weary of catching an artist as they tour to support a new album. However, Blind Pilot had a great set of the perfect mix of songs off 2008’s 3 Rounds And A Sound and We Are The Tide, dedicating a little less than half the set to the band’s first release.

After opening with “Oviedo”, “Two Towns From Me”, and a block of three songs off We Are The Tide, Blind Pilot settled into an up-beat rendition of “The Story I Heard”. Immediately, the crowd began dancing and singing along. To my right, two couples started swing dancing as if we were back in the ’20s, and the ornate plastering inside the Great American Music Hall only enhanced that perception. This marked my first “highlight of the night” moment. A few songs later, the whole crowd was dancing to the beckoning drum beats of “Go On Say It”, and the balconies and acoustics of the Great American Music Hall helped the drums reverberate through everyone. Who knew an indie-folk group could get a sold-out crowd dancing to the point of shaking the entire floor? “Highlight of the night” moment 2.

Towards the end of the set, Nebeker hopped off the guitar to play the air organ for “New York”, the last song, and my personal favorite, off We Are The Tide. Following the more up-tempo and melodic “The Colored Night”, the crowd somehow fell to complete silence as Nebeker quietly began singing “New York”. Cue “highlight of the night” moment 3. By the end of their sixteen-song set, Blind Pilot captivated the entire crowd in their warm, melodic brand of indie-folk.

Then came the four-song encore, each a special moment unto itself. First was Nebeker’s “Hush, Little Baby” duet with Isakov. Nebeker then started playing “The Bitter End” by himself, as the band slowly walked back on stage as each member’s respective part slowly layered back into the song. As the band was retuning their instruments for the next song, someone from the crowd yelled “Rock, Salt, and Nails”, which caught Nebeker by surprise. After a bit of encouragement from the band and crowd, Kati Claborn agreed to sing the Utah Phillips cover. When Nebeker stated Kati’s voice was “made to sing the song”, he was not kidding whatsoever. This feature of Kati’s voice showcased her bluegrass and country influences, and immense talent that can often be overlooked.

Nebeker then asked the still-stunned crowd to remain silent, as Blind Pilot wanted to perform their last song entirely acoustic, without any amps. The band walked off the stage and settled down in front of the crowd with just their instruments. Slowly, the entire crowd started to sit down, until not one person remained standing on the floor, save for the band. Just before the band began performing an entirely acoustic version of “3 Rounds And A Sound”, the title track off Blind Pilot’s first release, Nebeker bashfully asked that every one put their phones away to avoid distracting from the performance. The crowd sat and swayed, while quietly singing along, not a phone or camera in sight. Every person in that crowd left knowing that music can touch anyone because of that singular experience.

Now that truly was the highlight of the night.

Gregory Alan Isakov
Isakov, a good friend of the members of Blind Pilot, played a short, but well-selected opening set. Admittedly, I had not heard of Isakov before the show, but I was immediately blown away by his voice. He typically plays with a full backing band, which better reflects the recorded versions of his songs. Live, and solo, however, Isakov’s amazing voice and quiet guitar stylings reminded me of a modern-day, slowed down, country-folk combination of Langhorne Slim and Johnny Cash. That’s quite the (strange) comparison, but he really was that great. My personal favorite from his set was “Master & A Hound”, a stripped down, melodic and emotional display of Isakov’s songwriting and lyrical skills.

Half-way through his set, Isakov invited Israel Nebeker of Blind Pilot up onto the stage to play banjo on a few songs. Whether a planned duet for the whole tour, or a genuinely spur of the moment exchange, the two performed a couple beautiful songs together. I said “Master & A Hound” was my favorite from Isakov’s set because Nebeker brought Isakov back onto stage at the beginning of Blind Pilot’s encore to perform quite possibly the most beautiful interlude of “Hush, Little Baby” (yes, the mockingbird song) I have ever heard.

I entered the show expecting a mellow night of indie folk music. I left with my new favorite indie folk artist.

Check out Gregory Alan Isakov’s website here, where you can stream most of his songs, and purchase his CDs or newly-available vinyls. 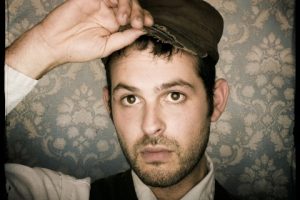 Last Sunday, I had the pleasure of seeing Gregory Alan[...] 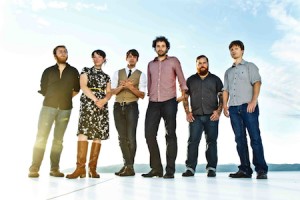 Only eight months after their unforgettable performance at the Great[...]

Singer-songwriter Gregory Alan Isakov is coming to LA to play[...]