The EDM scene is arriving in LA one DJ at a time, and the city appears ready for it! On Tuesday night 21 year old Swedish DJ Alesso put on the most anticipated EDM set in Los Angeles this month. He is the latest in a string of top-100 DJs, including Tiesto and Sebastian Ingrosso, to perform at the revamped Greystone Manor on La Cienega. Playing to a very sold out crowd Alesso gave the people everything they wanted, playing his remixes of all the big club hits. Read more after the jump.

Alesso went on exactly at midnight and played a two hour set of hits including his own remixes of Swedish House Mafia’s “Save the World”; Nadia Ali, Starkillers & Alex Kenji’s “Pressure”; and finishing with  his signature hit “Calling” that he produced with Sebastian Ingrosso. And in classic California fashion he finished his set exactly at 2:00am, which is very early for a DJ set but hell its California. Alesso is only 21 years and does not have a huge catalog of his own material…yet… but he does know how to work a crowd. It’s difficult to stray too far from the hits when you only have a two hour set but Alesso expertly mixed trance grooves and massive breakdowns within the structure of each track. He kept the crowd dancing and waiting for the next big breakdown. Although not his most creative artistic set, he did set the tone for a huge party at Greystone Manor and he gave us all a peak at what this 21 year old may have in store for the EDM world in the future! 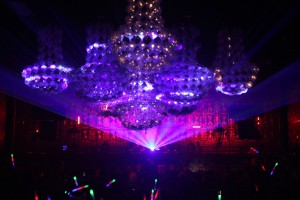 Alesso was also celebrating his 21st birthday (he turned 21 on Saturday July 7)! Fellow DJs Dimitri Vegas, Like Mike, Arty, Norman Doray, and Eric Prdz all came out to celebrate Alesso’s 21st with him.

Greystone Manor reopened in late 2011 as the latest reincarnation of SBE’s Industry on La Cienega. Two gilded bars provide easy access to drinks, six LED powered chandeliers dominate the ceiling above the dance floor, and an elevated performance stage stands at the head of the dance floor with tables spiraling out from it. It is more of a luxury hotel dinner theater than it is  a bar or nightclub, but when the theater performer is a top-100 DJ armed with smoke machines and confetti every guest becomes part of the performance. Foam LED batons were tossed into the crowd and were waved constantly above heads on the dance floor, and with every Alesso breakdown the entire floor seemed to roll in waves of jumping people. Greystone Manor is designed perfectly for the kind of theatrics associated with a destination Hollywood event: glamor mixed with a little of the bizarre as dancers performed on railings behind the stage and hung from circus hoops high above the crowd. 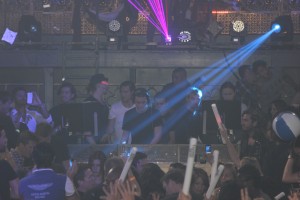 Alesso in the middle of the his set and in middle of his fans crowding around the DJ booth.

However, because its a hot Hollywood club it isn’t the easiest place to gain entrance to. The layout is designed to cater to table service with only a relatively small public dance floor, which enticed droves of beautiful people to dance on their couches and the elevated rails surrounding the tables. The doors closed at 11:10PM to everyone including guest lists and bottle service, so it’s necessary to arrive very early.  “If you build it, they will come,” and booking top DJs Tiesto, Sebastian Ingrosso, and Alesso is definitely building it. Once inside though, SBE has created a truly surreal nightlife experience. 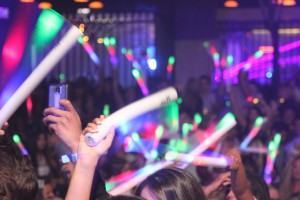 We’ll have  some video from the show available shortly…so stay tuned! 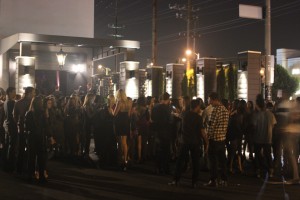 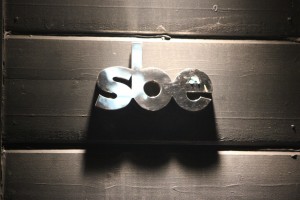 SBE seems to have got it right with Greystone Manor 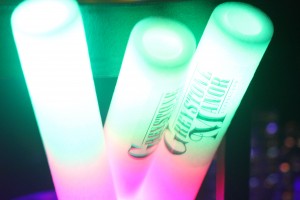 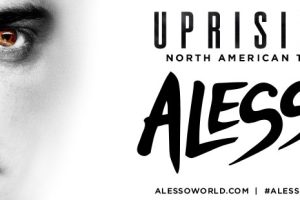 Alesso’s “Uprising” tour is coming to Los Angeles in November[...] 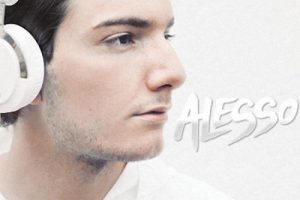 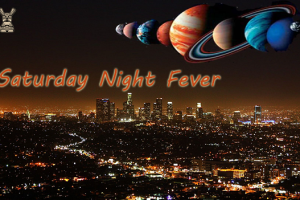