Emily Armstrong of Dead Sara wanted to something special for the holidays, so she decided to throw a party for her friends and family. We are of course thankful that “party” meant an adrenaline laced Dead Sara concert at cozy Harvard & Stone in Hollywood! Thanks for the early holiday present.

The four-piece rock band from LA took the stage around 11:30 p.m., with no acts before or after, and then got up close and personal with the approximately 150 people that came to support them. “This is a really small stage in a really small venue,” Armstrong said in the beginning of her set. “There is no one after us, so we’re going to take our time.” 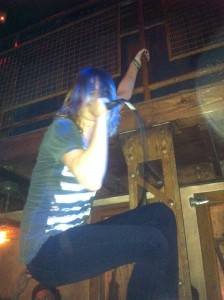 Armstrong’s fearless vocals and high energy off-the-wall (literally) stage performance combines with guitarist Siouxie Medley’s chaotic monster guitar riffs to make enough noise to knock the crowd at such a small venue back on their heels.

Armstrong belted out many of Dead Sara’s singles including a wispy version of “Sorry For it All” and a powerful performance of “Whispers and Ashes.” The show really took form when Armstrong announced that, since this is a holiday show, they would play their very own Christmas song!

The show hit a fever pitch when the band broke into a rendition of Rage Against the Machine’s “Killing in the Name of…” The crowd sang along as Armstrong climbed off the stage and up the scaffolding onto the top of a ledge overlooking the main floor. She swung around the venue from the scaffolding before climbing down and joining the crowd as the centerpiece of her very own pit. Dead Sara finished the set with their single “Weatherman” that Armstrong sang from atop the bar, finishing the set by crowd surfing back to the stage. 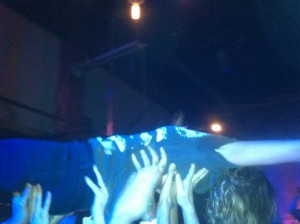 The only way to travel at your own party!

That is exactly the kind of Christmas Spirit that Dead Sara brings to their holiday shows.

Dead Sara will be joining Muse on a nationwide tour starting Feb. 2013, including a Mar. 17 date in Las Vegas at the Mandalay Bay Resort.

Check out the video for Dead Sara’s single “Weatherman”: 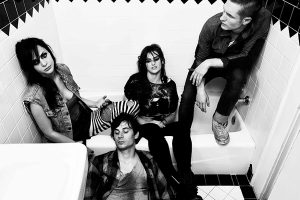 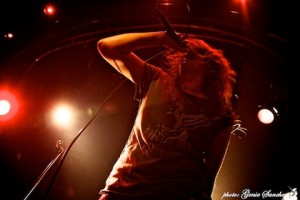 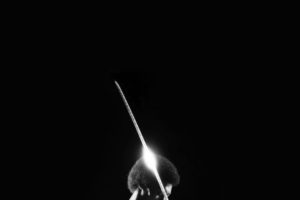 Interested in some free music tomorrow in Los Angeles?  We[...]