Jimmy Cliff brings the people together.

The Troubadour was packed Wednesday night for an intimate performance by Reggae’s last living legend, Jimmy Cliff. Cliff has been touring hard in anticipation of his latest album, Rebirth, produced by Rancid frontman Tim Armstrong and set for release on July 17th. Rabbits Black was at the sold-out show to report.

Jimmy Cliff is one bad-ass MF.  He broke onto the reggae music in 1962 at age 14. He wrote the songs, “I Can See Clearly”, “You Can Get It If You Really Want”, and “They Harder They Come” (the last for the eponymous 1972 film in which Cliff also starred). Recently, Cliff has appeared locally at Coachella, the new Sonos Studios, and even Hollywood Park less than two weeks ago.

All this activity is spurred by Cliff’s first studio release in seven years, Rebirth. The album, produced by Tim Armstrong of Rancid and the Transplants, is already shaping up to be a milestone for Jimmy Cliff, if the seven tracks he played at the Troubadour show serve as an indicator.

Of course, Cliff is a spectacular stageman with 50 years performing under his belt. The man knows exactly how to play to an audience: Before even arriving on stage, his back-up musicians set the scene in fine Ska tradition, wearing matching beautifully-detailed red and black button ups with JIMMY CLIFF on the breast and the Eye of Ra and REBIRTH across the back.  The band heralded Cliff onto the stage with the opening chords of “You Can Get It If You Really Want” at which point the full house went wild. Cliff appeared resplendent as a reggae jester-regent in a canary yellow snake print suit and Rastafarian scarf and headband. 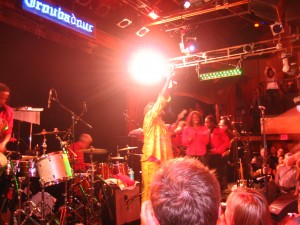 Reggae explodes from Jimmy Cliff’s being at the Troubadour

From the moment he stepped on stage and throughout the entire performance, Cliff displayed incomprehensible energy for a man of 64. He danced like an an imp, leaping and laughing across stage. After the crowd-pleasing opener, Cliff started sprinkling in new tracks from Rebirth, starting with the socially conscious “Children’s Bread”, in amongst the classics: “Treat the Youth Right” and special crowd favorite, “Wild World.” This interspersing of new and favorite tracks shows how Cliff knows how to give his audience what they really want: songs old and new and old with a new twist. Cliff showed off two covers that will appear on Rebirth, Rancid’s “Ruby Soho” and The Clash’s “Guns of Brixton”, both which were warmly received by the crowd. “World Upside Down” is endlessly looping on my mental playlist days later, as are “One More” and “Reggae Music”. He also revamped the classic protest piece “Vietnam” as “Afghanistan”, updating his message for the modern era.

Aside from the exciting new songs from Rebirth, Cliff played a slew of classics – “King of Kings”, “Sitting in Limbo”, and “Let Your Yeah Be Yeah”, before picking up a guitar for “I Can See Clearly Now”, which threw the crowd into a frenzy.

At this point, the stage was set with what seemed like more bongos than musicians. What followed was an unforgettable 8 and a half minute rendition of “Bongo Man,” a striking highlight of the evening. Cliff segued a frenetic track from the new album, “One More” before leaving the stage – but of course the crowd kept chanting “one more”, and of course Cliff came back, for his first of two encores that night. 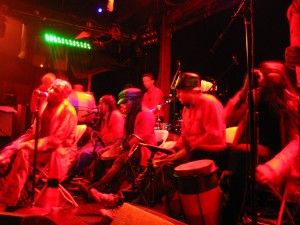 The  last track of the evening from Rebirth was the highly addictive “Reggae Music”, for which Cliff got the whole crowd singing – “reggae music gonna make me feel real good, reggae music make me gonna feel alright” – the sentiment that defined the night. “Wonderful World, Beautiful People” was next and Cliff and his crew kept the good feelings flowing before leaving the stage to set the scene for his final encore.

Cliff finished the show with “The Harder They Come” – but not before showing off some sweet reenactments from the eponymous 1972 film, including a wicked spinning jump and some pistol whipping. Cliff also announced that a sequel to the movie is in the works.

After playing quite a few large shows in the LA area, Jimmy Cliff’s performance at the Troubadour was a special treat for new fans and especially old. The Reggae regent kept the crowd grooving all night, and what we heard off Rebirth promises that the album will be a milestone for the reggae legend. After fifty years making music, Jimmy Cliff isn’t done yet.