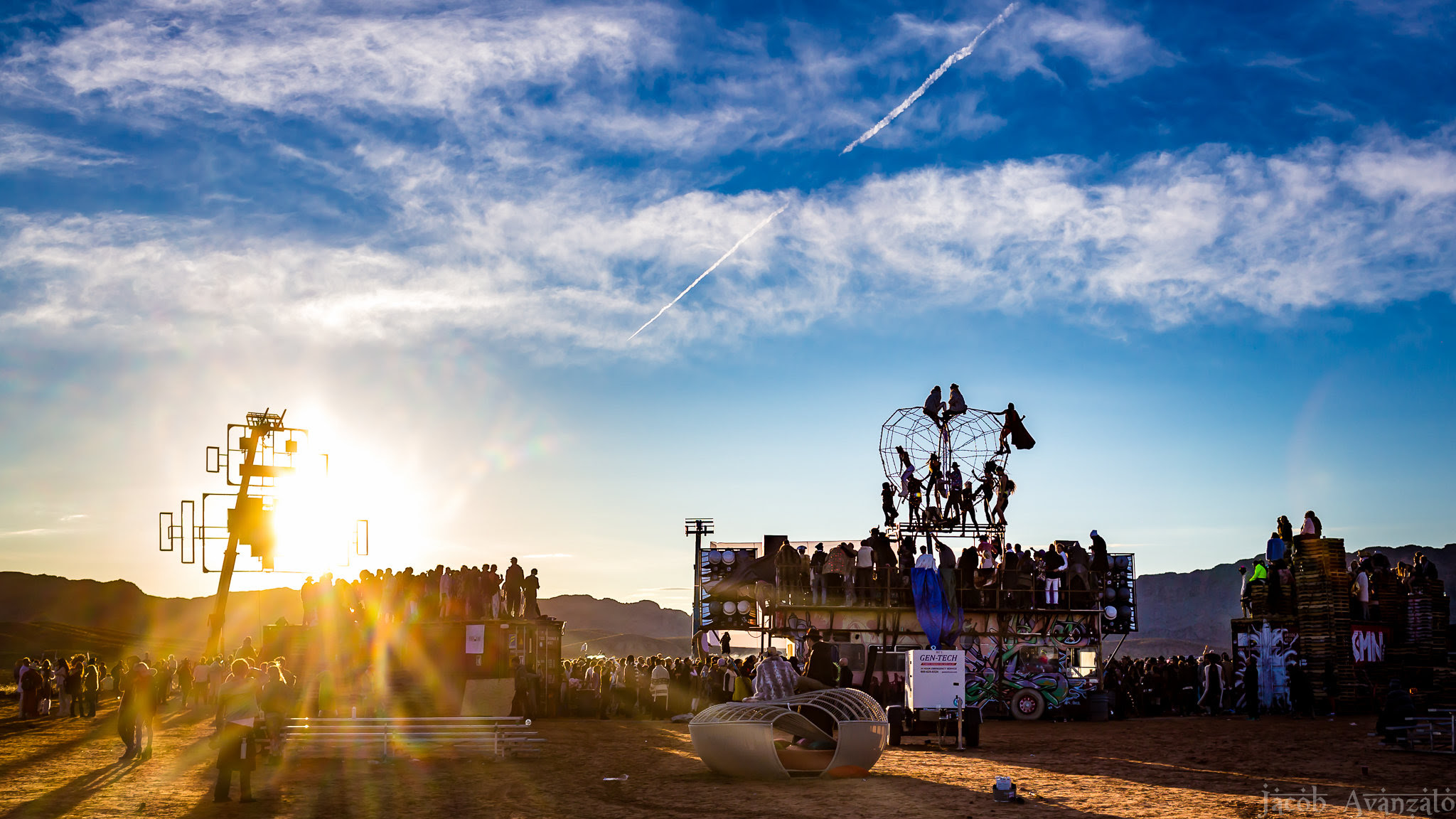 The future does not, apparently, involve checking the weather forecast. At last weekend’s Further Future festival neither the organizers nor any ticketholders (your correspondent included) seemingly bothered to check the weather channel. As a result, Friday’s long-predicted Mojave desert rainstorm came as a complete surprise to all involved: sparse festival fixtures (think gauzy billowing fabrics and artfully scattered cushions) disintegrated in the rain, music cut out, and meditative yoga classes were abandoned — in Maslow’s hierarchy, shelter comes before mindfulness.

By the early hours of Sat morning, Further Future teetered on the brink of disaster: woefully unprepared Futurists fled to their RVs, everyone was cold, wet and miserable, and the programming schedule had been completely abandoned. And yet, for the second year in a row — last year construction cranes were still assembling stages on Sunday morning — FF pulled off a miraculous escape, once again saved by the music. Festival goers who braved the rain and made their way through the near-abandoned muddy grounds discovered the tiny (and, crucially, rain-protected) Void tent wherein Dixon — head of Innervisions and widely considered the best DJ in the world — played to a packed but absurdly small audience. As the rain continued fall, the ecstatic crowd danced in defiance of the turmoil and mess around them, a sort of survivor’s mania. As his six hour set stretched into Sat morning, eventually the rain died down and Dixon led a magical sunrise pilgrimage outdoors to the iconic Robot Heart bus, without missing a beat in the spine-tingling performance.

Other music highlights included Dan Snaith’s Caribou rocking out at the Mothership stage on Friday night, just before the rains short-circuited the festival, and Satori’s unique, eastern-influenced vibes on Saturday night. Earlier that eve Nicolas Jaar drew the biggest crowd — aided, doubtlessly, by the relative lack of rain — and played the most divisive set of the festival. For some it was a masterpiece of textured and intricately arranged beats. For others, it was a display of studio virtuosity without heart; self-indulgent technical mastery lacking groove and melody. Other notable performances included All Day I Dream boss Lee Burridge’s deep house set on Sunday morning — which was a touch disappointing, only picking up after the sun rose — and followed by Frank & Tony, who were frankly awful. For the second year in a row they played a string of generic-sounding tracks that felt completely out of sync with the crowd and would have been better suited to the tight confines of their usual Output residence. Sadly, however, most of the commentary about the festival has barely even touched on the music, instead shining a harsh but accurate spotlight on their insufferable branding. As a “transformational festival” FF advertises its “intentional” and “discerning” community (aka holier than thou) and “unabashed luxury”. Everything annoying about FF last year was amplified this year: 7 dollar lavender lattes now at $9, fine dining options up to $250, and fully staffed (personal butler!) camping options for up to $7,500. Even the TED talks were more self-aggrandizing — everyone from Eric Schmidt to Bob Pittman humblebragging their way to coolness — and the ‘wellness’ situation was truly out of control, with multiple competing mushroom shaman lectures.

Moreover the appropriation of the Burning Man aesthetic, not to mention the indirect commercialization of a non-commercial BM camp (hello Robot Heart), feels tawdry. And the resulting crowd was, unsurprisingly, heavy on the expensively styled scene tourists and faux-community. As the beatport article pointed out, “what does it say about a festival whose crowd is defined by the experiences of another event?” Mercifully, there’s a simple solution to this ‘bougie burning man’ aspect of Further Future: Skip the crap. Attending the festival need not be particularly expensive — under $350 with an early bird ticket and camping pass — and there’s no need to partake in the talks or ludicrous dining / camping options (in fact, the expensive camping areas looked suspiciously empty). The surprising lack of people (attendance: ~4,000) meant that there was lots of free space, uncrowded dance floors, and room for serendipity. For all of its aesthetic self-consciousness, the crowd was free from ‘cameras in the air’ photo taking (although there was plenty of posed instagraming happening around the stages) and the ability to run into the same faces again created opportunities to strike up new friendships.

Ultimately the best thing about Further Future is its musical programming and everything else is a distraction; if you went for the ‘wellness’ you got what you deserved. I for one, however, had a great time and can’t wait for FF003.