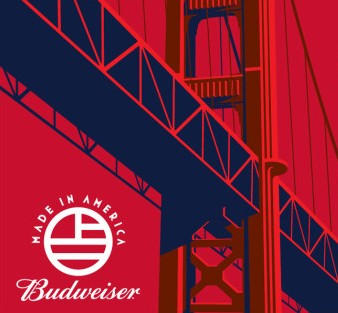 Here at Rabbits Black, we LOVE giving away free stuff.  Especially concert tickets.  That’s our bread and butter; the union of yin and yang; pretty much the only thing that gets us up in the morning.  It’s what we DO.

And usually, we’d be tickled pink to throw a ticket contest for that summer show with the artist you’ve been dying to see, but that somehow sold out like three months ago. And after jumping through a few hoops, and telling us how awesome we are (aww, you really think so?), you’d hope and wish and pray that like Charlie Bucket, it would be you who opened that chocolate bar with a gleaming corner of a golden ticket peaking out, and you’d run it home as fast as your little legs could carry you, knowing that you were about to spend the freakin’ weekend on an inner tube floating down Willy Wonka’s chocolate lazy river.

And we could sleep at night knowing we helped make that happen.

But in this case, Budweiser has taken the wind from under our sails, because rather than let us shower a bit of exclusive merch on our loyal fans, they’ve cut out the middle man and are literally figuratively making it rain on the Bay Area.  That’s right, the same people that brought you Dillon Francis last summer at Fort Mason with their annual FREE ‘Made In America’ summer concert series are back with another remarkably philanthropic show that will absolutely knock your socks off. Ironically enough, the headliner at this year’s “Monument Series: Golden Gate” concert will be none other than Cash Cash. But that’s not all, because it will also feature E-40, as well as Day Wave! As if that wasn’t enough, there will also be all the booze and food necessary to keep you dancing until you do, in fact, knock your socks off, and all for the incredibly low price of…you guessed it…

What’s more (THERE’S MORE?!), this year the venue just got a whole lot bigger, as they’ve decided to drag the speakers out to Crissy Field, because apparently Budweiser recognizes that we’re still in a recession, and just about all of San Francisco could all use a handout.

So dance, drink, eat your heart out Donald Trump, because on August 15 we’re all going to live like moguls.

Get your tickets (PLURAL?! ARE YEW SURIOUS?!) here!

(Note: don’t forget to go through the confirmation process once you receive the email, as simply signing up is not enough)