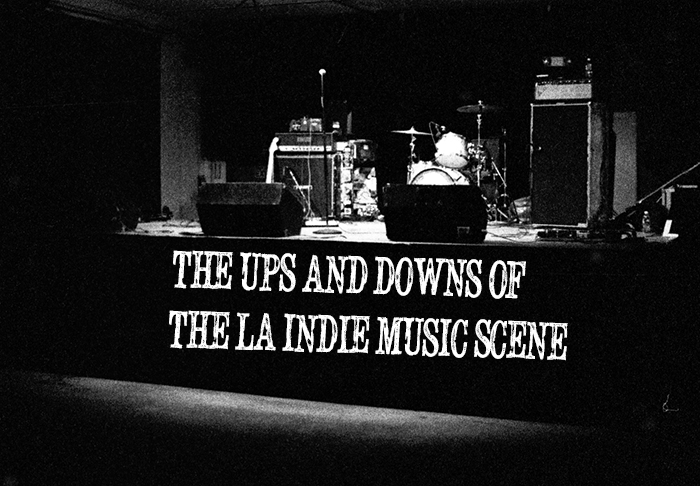 It is Princeton night at Culver City’s Mandrake bar. It is nearly unmarked, save for lit neon martini glass atop a nondescript row of industrial and artsy of buildings. Inside it is half Modern art museum project, half watering hole – since opening, the Mandrake has become a little haven for the westside’s and mid-city’s odd ducks. Old Gumby and Pokey film strips are projected against the room’s back wall. A DJ spins “Gettin’ Jiggy Wit it”, the highlight of my 7th grade bat mitzvah. The victorian-inspired barkeep twists a slice of lime in one hand and his mustache in the other. It’s the Dream of the 1890s and the 1990s at once.

In this case Princeton doesn’t refer to the the stodgy eating clubs or the moth-eaten letterman sweaters of the ivy league’s hallowed halls. This Princeton, named the Santa Monica street where most of its members grew up, is one of Los Angeles’ most alluringly talented and sadly now defunct bands. From east coast namesake, to L.A.‘s Eastside – Princeton was a common name on the bill at Los Angeles’ Spaceland (now The Satellite), Pehrspace, and The Bootleg with a notable amount of residencies over their tenure. Flawlessly arranged and infallibly tight, Princeton was a band that effortlessly moved between the fun kitsch sounds of yesteryear’s Carnaby Street and the synth pop of today.  Amidst the background of some rarified lyrical material, Princeton composed intricately woven and deeply textured music.

Generations of kids grow up dreaming of being rock stars: the art, the fame, the fortune, the rushing off stage to sell merch…the er, um looking to monetize the band in income streams from car commercials? As pilgrimages to Tower Records to buy an entire album for just our one favorite song have gone the way of the rotary phones,  the income streams for up and coming bands, abroad, and right here on LA’s Eastside, have accordingly been watered down. A music mecca in its own right and very much aware of it, the Eastside is home to seven main indie venues, not to mention all the other cafe-cum-art-spaces-cum-music-spaces.

That said, it must be easier in LA and for artists to garner a following, it’s gotta be cake, right? I stare in awe even in an old 1930s bra-factory-turned-music venue such as The Bootleg, as a band like In The Valley Below owns the stage. Method isn’t even the right word to describe it, this Echo Park outfit is the the Daniel Day Lewis of bands. From visual aesthetic, to sound, there is such an acutely cultivated persona at work here. Its difficult to imagine In The Valley Below’s Angela Gail and Jeffery Jacob as anything but the gospel-spewing, tent-revivalists that they convey on stage. 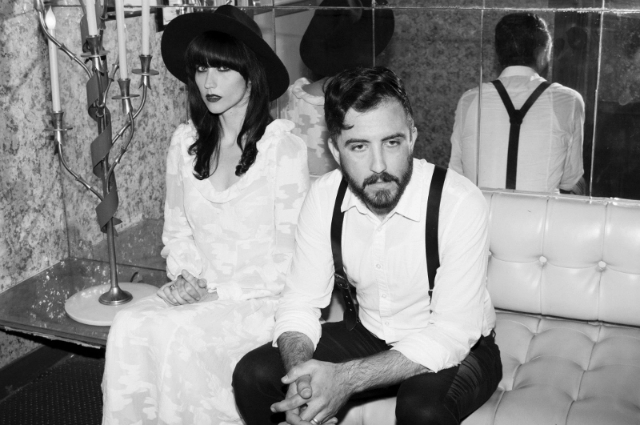 And yet its equally as hard to imagine that the profits of an up and coming band can sustain even a two member group, let alone a bigger outfit. Can playing to a room of 100 or 200 people, even five nights a week, keep a band afloat? Does being in an active, and even buzzed about band put ramen on the table? Well the answer is simple its it various shades of grey. And the clearest thing of all, is that it is not record sales or intimate gigs that put indie bands in the black.

There was a second bartender that evening as I walked into Princeton night at the Mandrake. Tall and sinewy with a chiseled and achingly familiar face – I racked my brain for a reference.  We probably went to school together. Everyone went to USC right? No. He must be an actor and I’m doing that awkward thing where clearly I “know” them from the TV show I watch him in. Closer. But that’s not it either. And then I put the puzzle pieces together. This is Princeton’s drummer behind the bar. Then I turn my head and see Princeton’s lead singer in the DJ booth. If their drummer is mixing drinks and their frontman is mixing songs, perhaps the only thing moneyed about the band is their ritzy name. I ask to interview them and will soon afterwards learn the following about one of tightest bands in LA, and also one of my personal favorites: despite indie label backing, live gigs all around the US and as far as Europe, plus the members tending bar here in Culver City, and also anchoring DJ gigs here and at the Short Stop in Echo Park, and jobs everywhere in between, it was just too financially draining to keep the band afloat.

The trough of artists begging to play Eastside venues keeps said venues’ rates competitive. Indie gigs are structured in numerous ways, but whether its a flat fee payment or some sort of door deal  that pays a dividend based on a percentage of audience attendance, it is a safe bet to say, that as an artist, you might be averaging about $200 for a night’s performance. Plus a free PBR or three. Using the venues to get their band name out is hopefully the impetus for new-found fans to go home and buy music. But with so much available online simply to stream, it seems fans would much rather continually hit “play” on a YouTube video or Soundcloud track than pay to download the song into their library. All for naught then, are those relatively favorable rev shares on Bandcamp (typically 90-10) and iTunes (typically 70-30) as they really don’t even come into play, “Big acts and small acts…nobody sells anything anymore,” says Daniel Kellner a manger with Benchmark Entertainment.  There are a few other income streams that pay rather nominal dividends for indie artists – royalties from performing rights organizations (around $.0425 per play) and merchandise. But regretfully, nothing to make you quit your day job over.

Then how does a band pay for a tour or make an album after lawyers, agents, and managers all take 5%, 10%, 15%, respectively, of a relatively small pie to begin with? Well the same way a struggling filmmaker might scrap and save and solicit from friends, so goes the story with a music makers. A self-produced album crafted in a home-studio can be made bare bones for around $5,000. As an up and coming artist, however, where unexpected costs occur and can accrue quickly, says Angela Gail of In The Valley Below, are the mixing and mastering of an album, “the people that do the best records are really expensive but you want it to sound the best that it can…” That initial impression from a debut offering is key, and will can very easily make or break an a band as a viable new artist within the recording community. So, if an indie album is self-produced, the mixing and mastering is inevitably where you’ll find the majority of that $5,000 budget going. Thankfully, though those costs aren’t entirely preclusive to making a great record, as Gail notes she and her partner in crime, Jeffery Jacob made their 2012 Self-titled EP “on the salaries of two people working in a restaurant.” Making great music in Los Angeles is possible even on a shoestring budget.

Most indie record deals do not include a budget for touring. As a result, bands will typically tour as long as they anticipate breaking even on their own dime, or “even take a small loss if we knew overall it would would be good for us,” says former Princeton drummer David Kitz. So while ticket sales are really the most consistent income stream for band’s here on L.A.‘s Eastside, the holy grail for up and coming bands is really a licensing, or sync deal. The use of a song in a commercial – a product spot, TV show or movie spot. With this type of exposure a band can, overnight, go from locally known to nationally recognized. These kinds of deals can vary in their lucrativeness but can bring in the low three, to four figures. All the sudden a band has made a week’s – or maybe more likely, a month’s – pay in a single contract signature; and their song has made its way to the ears of the entire American public. As Kellner notes, whose band the Silver Lake-based band Miner had their own sync deal with Microsoft, “you’ll all the sudden get people who hear of you who think you can play a venue out of [LA].” That is a key in putting said band in a unique power position as a recruited entity. Being recruited by promoters enables a band the ability to negotiate, and ultimately command better door deals. 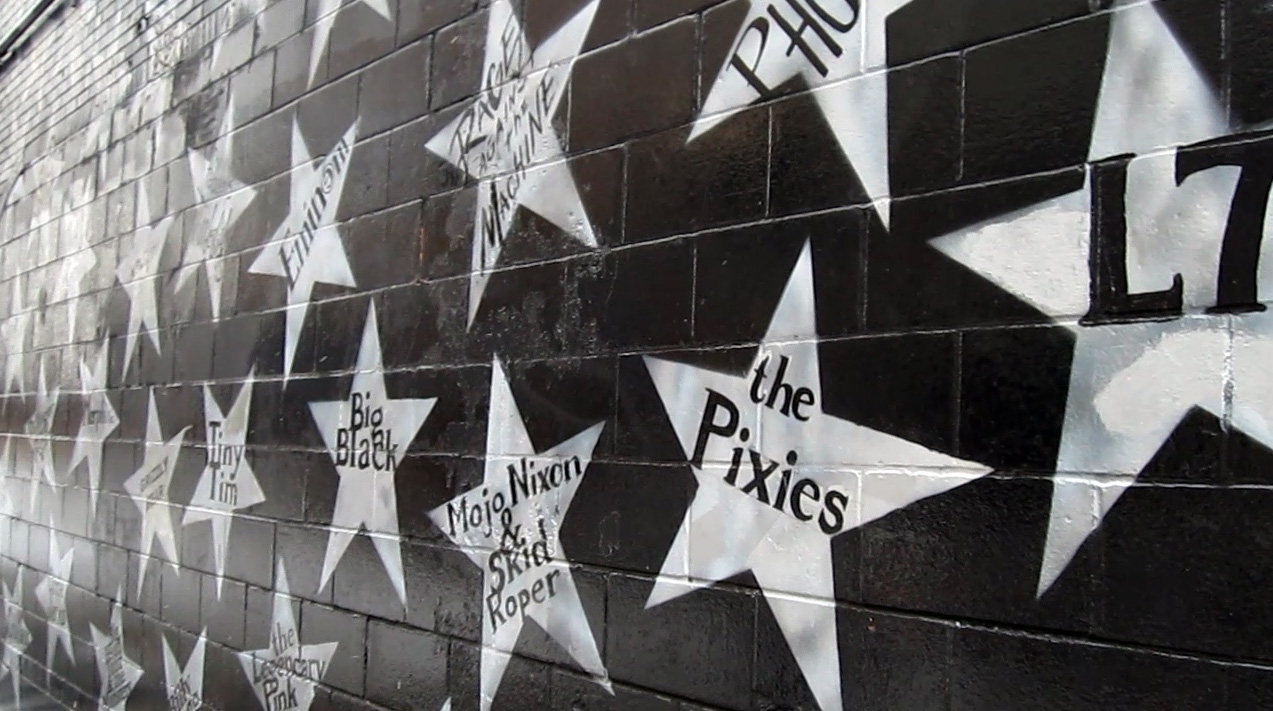 The stars give hope to up and coming bands – there is always the dream.

Though no two bands are the same nor do they travel the same path, the world they play within is. And the immediate goal of each up and coming indie act is simply to keep one’s head above water until that game-changing sync deal comes in. So whether that’s by teaching guitar lessons, tending bar, working at a marketing firm, or working in a restaurant, if a band can manage to tread water while building a local fan base their future can be bright. And those local bases are made by forward-thinking, proactive band members, Kellner stresses. The difference between sinking and swimming lies within a combination of A-type personality initiative, with B-type personality humility. Making connections with blogs, returning emails, always saying “hi” – those are the details that can steadily weed out the good bands, from the long-lasting ones.

In the Valley Below, who has managed to make their name through their Eastside residencies, incessant touring, and a constant blog-o-sphere presence has recently now signed to major label, Capital Records. Their “up and coming” days may quickly be numbered, in favor of those elusive licensing deals and significant national airplay. As for that particular band who shares a name with New Jersey’s Ivy-league institution, Princeton night turned out to been no more than what I had initially seen. A guest DJ spot bolstered by a familiar name. So although Princeton was unable to make it work financially, from their ashes a new crop of promising, if not hotly buzzed-about, musical endeavors have risen. Drummer David Kitz is drumming with Americana singer-songwriter Robert Francis. Co-frontman Matt Kivel has struck out with his own cerebral folk solo project, and brother Jesse Kivel is one half of one of the buzziest new projects around, the electro-pop project, Kisses.

Tags: In The Valley BelowindiePrinceton