Will Sergeant, best known as guitarist for Echo & the Bunnymen, is unveiling his fine art skills with an exhibit at the Substrate Fine Art Gallery. Sergeant has received critical acclaim for his body of artwork, including abstracts, collages, and screen prints. Its not often that a prominent musician can make a successful transition into fine arts, but Sergeant’s exhibition comes directly from the famous Penny Lane Gallery in Liverpool, England. Sergeant also exhibited a few select pieces in Los Angeles at the Mr. Brainwash Art Show 2011. The exhibit, entitled “My Own Worst Enemy”, will mark the first major U.S. exhibition for Sergeant. The exhibit is available at Substrate from May 18th to June 16th 2012. 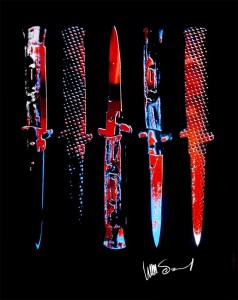 Segeant has spoken about his creative process: “All of the works mean something to me and have a story behind them. Some of them are tied to events that have taken place on tour or by situations I have found myself in.” Sergeant approaches painting in exactly the same way as he approaches creating music. “It has always been a mystical process and I still don’t understand where it comes from,” he says of creating. “I begin sometimes with the most vague idea of where I would want to go with the music. I have found if you have a strict plan it never ends up as you have imagined. And, as with the music, the paintings create their own path and they just lead me down it.”

In 2002 Sergeant was invited to be a visiting fellow at the Liverpool School of art and design by Professor Colin Fallows. “This was the beginning of the transition between making art for my own entertainment and I started to take it a lot more seriously.” Heavily influenced by the New York School of painters of the twentieth century, especially Barnett Newman, Sergeant tries to create his own identity in his art. 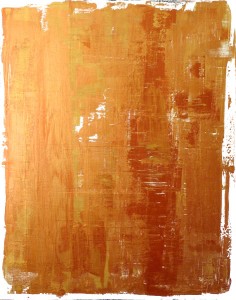 "The Book of Pleasures Vol 1"

Highlights include some of his minimalist pieces: Behind the Voodoo Curtain, 21st Century Fallen, Dream On!, Fade Out and Trying to Master Unseen Forces. 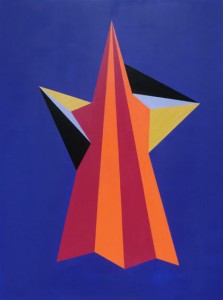