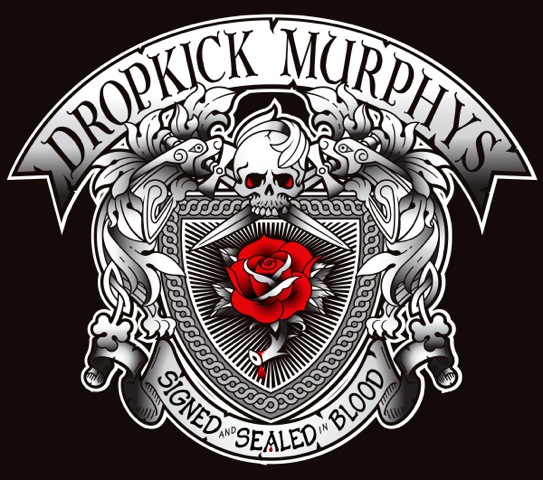 The Dropkick Murphys aren’t stopping. In fact, they seem to be picking up steam. It’s a new year, which means March is just around the corner, and these New England boys plan on taking full advantage of the Irish holidays. The Boston-based rock band released their new studio album, SIGNED and SEALED in BLOOD, today via Born and Bred Records. Learn more about the new album, as well as tour information (sorry, no CA dates yet), after the jump…

The album is their second with producer Ted Hutt (Gaslight Anthem, Old Crow Medicine Show), which was recorded at Boston’s Q Division studios and mixed by Joe Chiccarelli (The White Stripes). “We had such a great time writing our last album, Going Out In Style, we were excited to get back into the studio right away,” says bassist and co-lead singer Ken Casey. “Where Going Out in Style was a concept album-kind of intricate and difficult-this one is catchy, fun, and as sing-along as can be.”

Their holiday song “The Season’s Upon Us” saw the band charting higher than they’ve ever been before:

This is all in advance of the release of the album’s first proper single, “The Boys Are Back.” Check out the NHL promo featuring the new single here:

Dropkick Murphys will be supporting the new album with their 2013 “St. Patrick’s Day Tour,” which will begin on February 21 in Cleveland, OH and concluding with three dates in their hometown of Boston, MA including a headlining spot at the Boston Garden, now known as TD Garden on March 15. The Garden show will be billed as “Dropkick Murphys Irish Festival,” with bands and attractions on two stages. The entire tour will have an epic finale on St. Patrick’s Day (March 17) at The House of Blues on Boston’s famed Lansdowne Street.