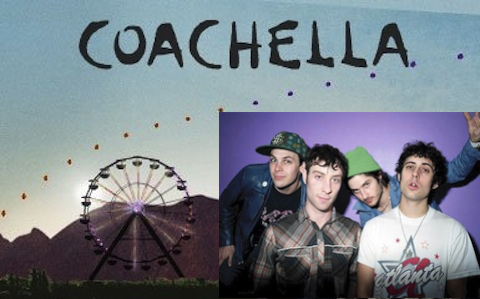 In the latest installment of our “Coachella Primer” series we take a look at the sometimes volatile and always unpredictable Black Lips! This Atlanta-based quartet – Cole Alexander (Vocals, guitar); Jared Swilley (Vocals, bass guitar); Joe Bradley (Vocals, drums); Ian Saint Pé Brown (Lead Guitar) – is best known for their raw recordings and “exposed nerve” live performances. They like their sound best on cassette and their shows best uncensored. They are talented and raw but have recently spent  significant time in the studio with producer Mark Ronson, and it might be worth seeing what a little polish can do for this young high-energy band. They will play early enough on Saturday that there won’t be any major conflicts. So if you’re up and feeling refreshed after Friday night, take a little walk and check out the Black Lips!

The Black Lips recently released Arabia Mountain, their sixth studio album and fourth Vice Records release. This is the first time the Black Lips have collaborated with a  producer on an album, and they couldn’t have made a better choice than Mark Ronson (best known for his work with Adele, Kaiser Chiefs, Duran Duran, and Amy Winehouse).

“While the Lips have by no means turned their backs on the storming punk and garage-rock that is the core of their confrontational style, working with Ronson allowed them to work at a more relaxed pace and refine their song-oriented side. ‘We’ve gone in and done a whole album in a week,’ Cole says. ‘After our last album, we plateaued with that approach. We decided to spend a lot of time and actually work on this record. It ended up taking a year and a half, which is the longest we’ve ever spent. We had some good pop songs in the past, but they got buried in the swampy production. Beefing up the production made a difference. It was a little outside the box for us, and a little outside Mark’s box as well. … We tried to do what we do best, and keep it raw, but we also opened up to working with a producer and experimenting with new sounds. We tried to keep doing what we’re doing, while expanding and growing at the same time.”

Check out a few videos below: