A few weeks ago, Fitz and the Tantrums came through San Francisco for back-to-back nights headlining at the Regency Ballroom. Based out of Los Angeles, the sextuplet will bring a groovy neo-soul sound to Coachella on Sunday night! Founded by lead singer Michael Fitzpatrick in 2008, Fitz and the Tantrums will have you dancing, clapping, and singing along in no time. Their soulful chord progressions and catchy hooks and lyrics will turn anyone into a fan. Hit the jump and find out more about the band that’s bringing soul back in a big way!

Fitz and the Tantrums started after Fitzpatrick picked up a vintage organ from a garage sale. Seven hours later, and Fitzpatrick had written Breakin’ the Chains of Love. After suddenly finding his voice and style, Fitzpatrick recruited John Wicks on drums, Jeremy Ruzumna on keys, James King on saxophone and horns, and Joseph Karnes on bass. To accompany the tight musical group, Noelle Scaggs powerful and Motown-reminiscent voice provides the perfect match to Fitzpatrick’s vocals. Together, the six members of Fitz and the Tantrums take over a stage and crowd with such a sharp precision that every person leaves a show as a fan.

Looking at the song titles, it would be easy to write off the group’s debut album, “ickin’ Up the Pieces”, and its preceding EP, “Songs For A Break Up, Vol. 1”, as flippant breakup albums. But such a classification sells the band short. Although Fitzpatrick himself admitted the song writing largely grew out of dealing with a breakup on KCRW’s Morning Become Eccletic (you can stream the show from KCRW’s site), the songs speak to anyone that has loved and lost. And they will make you want to dance your heartache out.

The lyrical arrangements and layering of Fitzpatrick’s and Scagg’s voices, combined with the soulful horns and grooving bass and keys, will transport you back to the 60s. On top of the music, the band always looks sharp. Real sharp. Mad Men sharp. 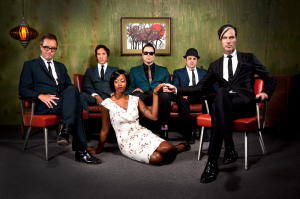 Fitz and the Tantrums: looking dapper while sounding sharp.

“Pickin’ Up the Pieces” has a wonderfully powerful studio sound, which can often be difficult to translate to a live performance. However, Fitz and the Tantrums take their recordings and make them come to life on stage. Scaggs works the stage and pulls the crowd in to experience the songs with the band. Before you know it, you’ll be clapping along like you’re at a gospel church.

Who knew breaking up could cause you to move your feet and dance? Check out some of the band’s music. By your second listen through, you’ll be hooked. And be sure to stop by and support Fitz and the Tantrums when they hit Coachella on Sunday’s lineup!

Tags: CoachellaFitz and the Tantrums