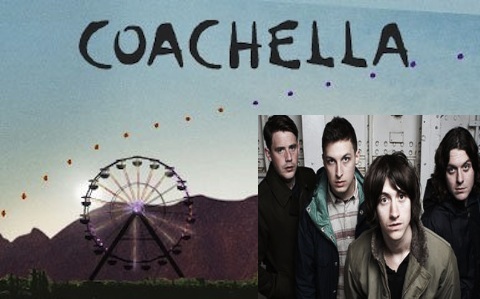 Most people are familiar with the Arctic Monkeys, but they just might be the most famous band nobody is talking about at Coachella. Their 2006 debut album set records, they have consistently had radio hits for the past 6 years, and they just released a very good (bordering on great) album Suck it and See in 2011. Undoubtedly Coachella has moved away from traditional Rock & Roll bands in favor of Indie and Electronic music, but if the Black Keys are a HEADLINER that means rock fans will still be out in force. With all the buzz focused on the Black Keys (who are great and deserve the attention), the masses are forgetting about who raised the bar first. There are two rock bands that will likely put on a better show than the “headliner”: The Hives and the Arctic Monkeys!

I’m going to put the Hives aside for now because this is a Monkeys preview, but just know that they will put on a great show. The Monkeys exploded onto the scene in 2006 and became an instant UK phenomenon. Their debut album Whatever People Say I Am, That’s What I’m Not became the fastest selling debut album in UK chart history, selling 363,735 copies in the first week. The album sold more copies on its first day alone – 118,501 – than the rest of the Top 20 albums combined. That’s pretty impressive.

The Monkeys have built a strong reputation with their live shows, and are now seasoned professionals on the festival stage. Along with a slew of international festivals on their resume, they have played ACL, headlined Benicassim Festival 2011 and Oxygyen 2011, and in 2009 headlined the enormous Reading and Leeds festivals! After the Black Keys lackluster performance at Coachella last year, it looks like the stage is set for the Monkeys.

In June 2011 The Monkeys released their 4th album, Suck It and See, produced by James Ford at Sound City Studios in LA. The current band members — Alex Turner (lead vocals, lead/rhythm guitar), Jamie Cook (rhythm/lead guitar), Nick O’Malley (bass guitar, backing vocals) and Matt Helders (drums, percussion, backing vocals) — have been touring in support of their latest release, and a little surprisingly, are actually opening for the Black Keys on their North American Tour. That is a pretty spectacular pairing, but don’t be surprised if the Monkeys steal the show!

“I Bet You Look Good On the Dance Floor”