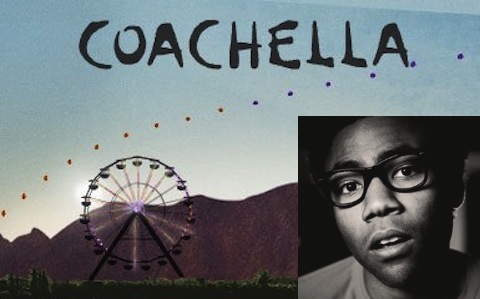 Unless you’ve been living under a media rock, you probably know who Childish Gambino is. (Hint: He’s Donald Glover. You know, the hipster dream boat from Community.) Having released his latest album, Camp, a little less than three months ago, Glover will definitely have a good show in store for Saturday. In this fourth installment of our running Coachella Primer, learn a bit more about the busy quadruple-threat.

When not writing, acting, or performing sketch comedy, Childish Gambino a.k.a. Donald Glover raps about being “the only black kid at a Sufjan concert.” Choosing to touch on themes atypical in modern, mainstream rap, Glover is extremely self aware and addresses his own personal struggles in his music.

Originally a DJ and producer, Glover began rapping over his own beats in the early-2000s. Now a more mature lyricist, Glover weaves his clever writing to spin stories about family, ethnic identity issues (get the multiple Oreo references?), and struggling to deal with his new-found fame. Although his more personal themes aren’t exclusive (give Heartbeat a listen), he approaches other topics in a more tongue-in-cheek manner. I’d like to see Jay-Z or Kanye talk about a gold digger with the line, “I give you money, then you burn me, like you Madoff.” His NYU degree in dramatic writing doesn’t hurt, either.

Transcending music genres and borders, Glover performed at this year’s electronic Snowglobe Music Festival to help bring in 2012. He has appeared at Comic Con (seriously), on Conan, and at UCLA’s BruinBash Festival.

Childish Gambino writes the type of songs that translate better the more you listen to them, and the more you pay attention to the lyrical content. Be sure to check him out on Saturday. In the least, you can tell people you saw “that guy from Community, you know, the hipster dream boat.”