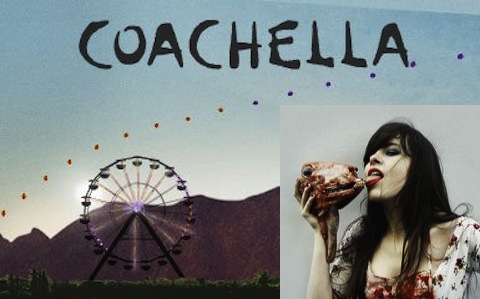 Installment #3 in our Coachella Primer series introduces something a little wild: Le Butcherettes! This is guaranteed to be one of the craziest live shows at Coachella, or anywhere for that matter. Le Bucherettes started in 2007 as an all-girl garage-punk band from Guadalajara, Jalisco, Mexico. The main attraction is frontwoman voclaist/guitarist/pianist Teri Gender Bender and her frenetic adrenline infused on-stage performances. She sings like an (even more) unleashed Karen O and will cover the entire stage and half the crowd with her flailing runs, somersaults, and maybe even a little blood. There is nothing else like this at Coachella, entertainment guaranteed. The band now includes drummer Gabe Serbian and bassist Jonathan Hischke and they released their first full length album Sin Sin Sin in May 2011 on the label started by Omar Rodríguez-López of the Mars Volta, who also produced the disc. In January 2010, Le Butcherettes were invited by the Yeah Yeah Yeahs as their opening act for their Mexican shows in Monterrey, Guadalajara and Mexico City. Le Bucherettes also opened for Iggy and the Stooges at the Palladium in LA 12/1/2011 and shocked even Iggy’s fans, who were undowbtedly already prepared for an outrageous show.

To get an idea of what we’re talking about check out their video for “I’m Queen” below:

Check out a few more songs:

Le Bucherettes – “I’m Getting Sick of You”