This is the first installment of our Coachella Primer series where RB will spotlight 12 different Coachella bands, one new one every week, leading up to the seminal Southern California music festival. One of the most redeeming qualities of large festivals like Coachella is the opportunity to discover new bands. It’s not always easy to spend money and drive to a show for a band you know very little about, but once at the Empire Polo Club its not that hard to simply walk over to a stage and check out something new. In installment #1 we bring you The Black Angels! 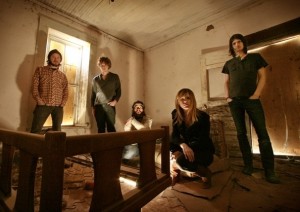 The Black Angels are from deep in the heart of Texas, and are now based out of the State’s music (and actual) capital in Austin. They formed in 2004 and have released 4 albums: 2006’s Passover, 2008’s Directions to See a Ghost, 2010’s Phosphene Dream, and 2011’s Another Nice Pair (whihc is a collection of the band’s first two EPs). The describe themselves as  a “heavy-duty psychedelic rock band with an incessant primitive beat that echoes the spirit of the 13th Floor Elevators and early Stones.”

Their sound is self-proclaimed “Native American Drone ‘N’ Roll” and they have the pedigree to make a splash at Coachella. They are festival veterans, having played Lollapalooza in 2007, SXSW in 2006 & 2008 and All Tomorrow’s Parties in 2008. To give you an idea of their music circles they have toured with this year’s headliner The Black Keys and well as RB favorites Black Rebel Motorcycle Club and Queens of the Stone Age. They ahve also toured with The Raveonettes, Wolfmother, The Warlocks, Roky Erickson, and The Brian Jonestown Massacre to name a few.

Check out the video for their single “Telephone” below:

Check out more of their music on their webiste here.