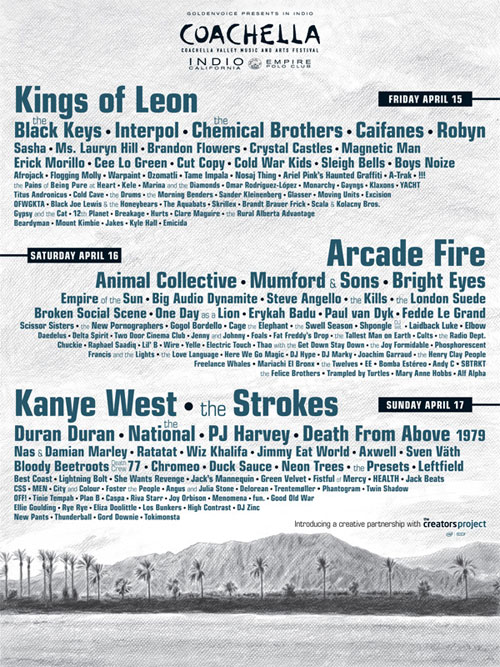 The Coachella line-up was officially released late last night.  Waiting for the announcement has become over the years part of the tradition and buzz of Coachella itself.  Well, it’s finally here and we don’t have to guess our spread rumors about the bands playing this year.  The line-up is heavy at the top with Kings of Leon, Kanye West and Arcade Fire all being huge touring acts.  From there we are greeted with a mix of local bands, Coachella regulars and Indie projects.  We would have liked to see one of those huge surprise headliners (Paul McCartney, Ozzy with Slash, Red Hot Chili Peppers- where are you guys?) and we still might with a late addition, but it doesn’t look too good for now.  It is also worth noting that the DJ scene at Coachella took a big hit this year.  With rumors of Swedish House Mafia performing and a possible Tiesto return, we are left with only one legitimate Top 10 DJ and that’s Paul Van Dyk who is easily seen on the club circuit in the United States.  Deadmau5 was the obvious candidate for the “it” DJ of the moment, but he didn’t make the bill.  Those of you looking to see some of the most popular acts in the world though, don’t have to look much further than the Top 3 at Coachella this year.