Last year it was the Tupac hologram.  This year it’s a time machine!  Coachella never ceases to amaze in its innovative concert technology.  The announcement of the 2013 lineup has been met with excitement around the world.  Somehow the people at Goldenvoice figured out how to make a time machine while booking these bands.  How did they find the time to do both?  Probably by not booking bands.  When festival goers scan their tickets this April at Coachella 2013, they will immediately be ushered into the carefully crafted vessels that hold 4-5 people, or 1 person staying in the campground.   These time machines will then transport everyone at the festival to Coachella 2007 where people would actually care about this lineup.  Technology!

The Postal Service is back!  And yes, apparently life does suck sometimes.  Modest Mouse is still a band, and in some distant universe people still care about Phoenix.  Luckily Phoenix is mid-day on Saturday, so it’s not like you won’t be able to just avoid that show if you want.  You can totally go check out some awesome, unique, once-in-a-lifetime headliner on Saturday instead.  Hey!  Blur has finally made due on that reunion they promised back in 2007.  But in the best news of the day, The Vampire Weekend have somehow received enough funding from KROQ to start making music again.  It’s good to hear that radio still has a place in this world.  Jurassic Park 5?!  Yes!  What happened to 4?

If you don’t want to stab yourself in the eyes The Following style, then I suggest you check out How To Destroy Angels, find a pool party somewhere else on Saturday, and finish off your weekend with Nick Cave and the Bad Seeds and Social Distortion.  Then have someone else drive you home. 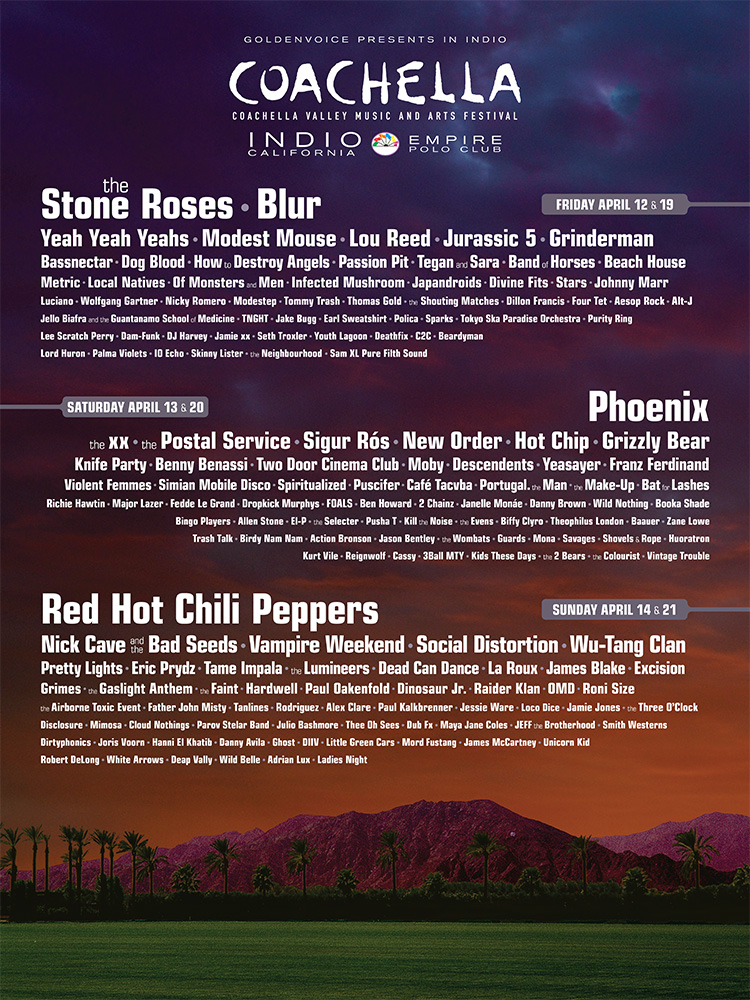