Headlining Coachella this year are The Black Keys, Radiohead, Dr. Dre, and Snoop Dogg. Just hours after At The Drive-In announced their reunion, Music Monday Madness continues as Coachella quickly and quietly drops the 2012 line-up. Hit the jump to see some of the highly-anticipated acts for this year’s party in the desert!

Continuing the 3-day format, Coachella promoters booked some heavy hitting bands. And rightfully so. Long-time Coachella fans have grown unhappy over the past few years with the hiccups the festival has run into as it became much larger than promoters could ever fathom. Coachella 2010 had ticket satellite failures, which resulted in a crowd tens-of-thousands over capacity and hours-long lines to get into a parking lot. Coachella 2011 had an unprecedented  sell-out in under a week, leaving many fans in disbelief over their inability to obtain passes (scalped prices rose to over $1,000). Finally, last year’s announcement of the new two-weekend format left fans wondering whether it was all just a huge money grab.

To make up for it, Coachella promoters had to get some really great acts to get fans to still come out. And that they did! Early-bird and installment plan ticket purchasers will be happy they stuck with the festival. Returning to many bands who helped propel Coachella into its current fame in the music festival world, organizers this year managed to curate a line-up that will satisfy old and new attendees alike. The only things that remain to be seen: how quickly tickets will sell out this year, and whether the two-weekend format will be a success.

Passes go on sale over at Coachella.com on Friday, January 13, at 10 am PST. Check back often to Rabbits Black to get the most up-to-date information on the line-up and ticket sales.

Some notable names on the Coachella 2012 flyers.

– The Black Keys – Many fans felt The Black Keys were a mediocre mid-festival, sub-headlining act in the duo’s 2011 festival rounds. However, the bluesy rockers have a brand new album under their belts, and a huge arena tour in their future. Maybe the practice with the larger crowds will help them satiate tens of thousands of Coachella attendees. The only way to find out? See for yourself on either weekend of Coachella.

– Refused – Refused are not f-ing dead. Another from-the-ashes post-punk band of the 90’s reunites for this year’s Coachella. After 14 years of absence, Refused alone may be worth attending Coachella on Friday. Although controversial in their reunion — remember their manifesto? — many Refused fans are prancing around in circles celebrating the phoenix-like return of the legendary, Swedish, post-punk rockers. Who was the other band to return in flames, you ask? None other than At The Drive-In, who subheadline on Sunday.

– Radiohead – (Author’s note: I made a promise to the RB staff not to let my Radiohead fandom leak too much onto the blog, but I am going to go ahead and let it happen right now.) RADIOHEAD. They haven’t had a proper tour in years. King of Limbs dropped online with very little support. And they headlined in what many call Coachella’s best year, 2004. Not coincidentally, also the first year Coachella ever sold out. Ever. You can always expect amazing live shows from Radiohead — from sold-out festivals, to intimate venues, to giant stadiums — and both weekends of Coachella will be no exception.

– Noel Gallagher’s High Flying Birds – Rabbits Black has given Gallagher’s new solo project a lot of coverage, and this will be a great chance to see if Gallagher can translate his success to a solo project at a huge festival setting.

– Dr. Dre & Snoop Dogg – Sticking with the hip hop theme of the third day (first Jay Z, then Kanye), this year’s line-up boasts Dr. Dre and Snoop Dogg. Coachella promoters are trying really hard to tap into the nostalgia from the music scene of the 90’s and early-2000’s.

– At The Drive-In – Rabbits Black just covered the highly anticipated reunion of this quintet. A sub-headline at Coachella can only mean more huge announcements from the band. 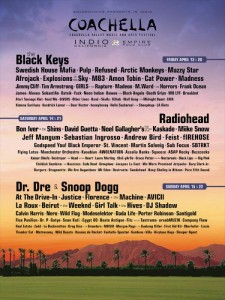 Note: Click on the flyer for a higher resolution image.