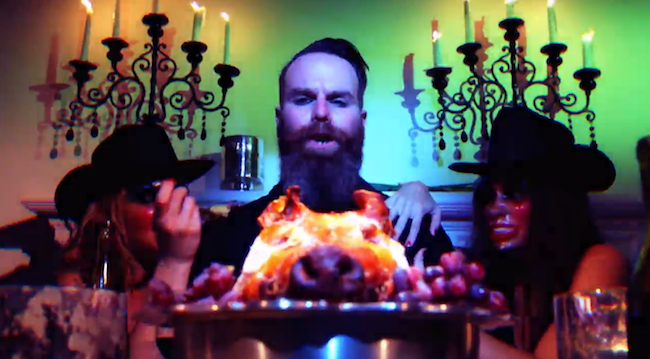 Joseph “Bunny” Holiday was the lead singer of the former Los Angeles hard rock band Lady Sinatra that disbanded late last year.  While Lady Sinatra may be no more, Holiday is continuing his full on assault style rock n’ roll with his solo project under the moniker Bunny Vincent.  Holiday has teased that new music would be released soon, posting some videos to the Bunny Vincent YouTube account that featured naked women crawling around mattresses and eating food-  ya, it’s going that direction!  The first single from Bunny Vincent, “Love Won’t Last”, is out now with an accompanying video that marries seizure-inducing art and heavy fast-paced rock.  The video was directed by Alex Patsos and features the other two members of Bunny Vincent; Christian Martuchi and Gene Louis.  It works, its weird, and its fun!  We’ve been fans of Lady Sinatra for years and Holiday has always been an entertainer.  If this first single and video is any indication, we can expect a lot more entertainment coming our way from Bunny Vincent.  We got more on Bunny Vincent for you!  Check back here next week for an exclusive interview with Joseph “Bunny” Holiday.  You can grab the single from iTunes with some remixes here.