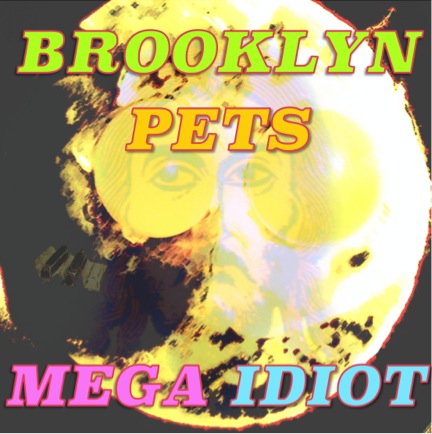 Brooklyn Pets gear up for the release of their first EP Mega Idiot on November 11th with a candid interview with Rabbits Black. Be the first to help celebrate with them at their Release Show on November 17th at Ham and Eggs Tavern in Los Angeles.

Brooklyn Pets, the duo that is composed of long time friends and collaborators James Poulos and Mark Reback, have announced their upcoming debut EP Mega Idiot that consists of their new collection of SPACEGAZE music. While this is their first EP together, they aren’t new to the scene. You’ll be surprised to learn that these two have been writing and recording music together for quite some time now and have really kept their work under wraps consciously until just recently.  Their band name ‘Brooklyn Pets’ may already catch your attention, but check out our interview with James (guitar, vocals) and Mark (drums) to get the full breakdown of Spacegaze music and what we can look forward to next from these rising artists.

Rabbits Black: Considering that you two have been collectively making music together for a few years, what made NOW the pivotal moment to release your craft?

Brooklyn Pets (James): Last year we were listening to a lot of bands that sounded raw yet pop, stripped down yet wall of sound. Some of them were a lot harder, some more electronic, but they all summoned forth a new kind of music for us. Suddenly there was this batch of songs that the muse had written for us, almost. We had to do something about it! 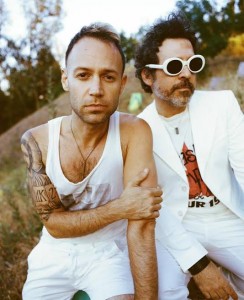 Rabbits Black: For those that are not familiar with you, what type of music does Brooklyn Pets play? Are there particular bands you would like to compare yourselves to, if any?

Brooklyn Pets: I love all my children, but my actual child, who was 4 at the time, interrupted me one day in the car. “You know what would be a good name for a song? ‘Electric Paws’.” I went home and wrote it in one sitting.

Rabbits Black: What does BROOKLYN PETS have planned after this release show? What can we expect next?

Brooklyn Pets: We’re filming a video for the song “Mega Idiot” very soon that’s going to be pretty demanding for us and pretty entertaining for you. There’ll be some more announcements relatively soon that we can’t talk about yet. Rather than cranking up for an LP, we’re more interested in relationships where music comes out in a steadier stream, connected up with the cool stuff other creators are doing. Working on some possible film, TV and video game placements as well.

Rabbits Black: Where do you get your inspiration from and how is it all put together?

Brooklyn Pets: Usually specific melodies or riffs come to me at random moments between – or in the middle of – the day’s chores. Sometimes I wind up demoing songs dripping wet from the shower. But we rehearse in a woodsy shack behind Mark’s house in Highland Park, and we love sitting out at night in the city or the desert. We draw a lot from that open air energy.

Rabbits Black: Musically, who has had the greatest influence on you and why?

Brooklyn Pets: It took a while for me to admit this but for me it’s probably Billy Corgan. He’s a fountain of music, he wrote so many hits, he could go full metal or be totally gentle, and he just pursued his own vision to the depths. Also he isn’t afraid to wrestle with God and cosmic stuff. That’s all central to what I think rock music can be, and probably should be. Besides the obvious answer of The Beatles, Mark’s biggest influence is probably The Verve, especially their early stuff.

Rabbits Black: If you could tour or work with any band from any time, who would it be?

Brooklyn Pets: There are just too many ever to answer correctly, so I may as well say Marilyn Manson, during the ’98 tour with Hole. It was sort of like a crazy demon that escaped from the imploding star of Smashing Pumpkins. A lot of the lyrics Manson wrote for Mechanical Animals sort of predicted the weird world we’re living in today. One of my greatest achievements it to have gotten some of them mentioned in that context in The New York Times. Mark would like to tour with the current line-up of the band Failure. They’re better now than ever.

Rabbits Black: Rumor has it that you’ve written some of your music in one of LA’s hippest neighborhoods of Silver Lake, known for their restaurants and nightlife.  What’s the best and worst place you have eaten?

Brooklyn Pets: Rumor is true. Highland Park too. The Brite Spot is probably the best diner in LA, and you can still order a turkey melt off-menu that I would eat every day if it wouldn’t kill me. For about $18 you can get an unbelievable Mexican steak and eggs plate at LA Mill. Worst food in Silver Lake was at the donut shop across from the Micheltorena elementary school, where I once crushed an entire cup of coffee trying to put the lid on. The explosion was so hilarious and mortifying that we both just ran out laughing.

Rabbits Black: What is your go to guilty pleasure song that most people would find surprising about you? Be totally honest, even if it’s a super cheesy one.

Brooklyn Pets: I say this every time – go listen to Andrew WK’s “Totally Stupid,” off The Wolf, which was supposed to be called Blow Your Bone. The last movement of that song makes me weep with joy. It is a triumph of the human spirit and ought to be the Olympic theme song. Mark loves an obscure Cheap Trick song called “Reach Out” from the soundtrack of the animated movie “Heavy Metal”.

Rabbits Black: A question everyone wants to hear answered: How did you come up with (or earn) the name of your band ‘Brooklyn Pets’?

Brooklyn Pets: I was driving through Hollywood one morning trying to zone out and I noticed a sign I’d never seen before, a little strip mall marquee that said HOLLYWOOD PETS. It was intriguing but somehow wrong. It also wasn’t available on Twitter. Malibu Pets was, but that sounded like a Barbie expansion set. Stumbling on Brooklyn was hilarious because suddenly there were all these resonances, fake explanations. “I name all my pets Brooklyn,” or “We are diehard fans of the Brooklyn Nets.” It sort of means everything and nothing. 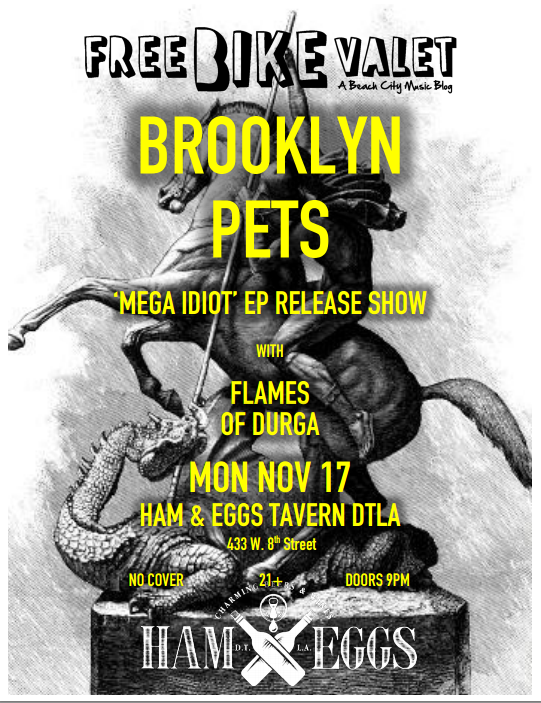