BottleRock, one of California’s largest music festivals, returns to Napa Valley May 27th to 29th for the fourth iteration of this growing festival brand. Starting a music festival from the ground up is no easy task, and BottleRock has definitely had it’s fair share of growing pains over the past few years. But ever since the new promoters, Latitude 38 Entertainment, took the reigns in 2014, things have consistently gotten better. Organization, infrastructure, security, ticketing, vendors… these are all things that are crucial to the attendee experience especially at music festivals. You can plan for anything and everything, but until you actually open those gates to your festival for the first time, there’s a lot to learn! Gladly these are all things that BottleRock is putting behind them in terms of their learning curve. With the organizational aspects of the festival improving every year, it leaves us to focus on the music and experience as a whole. And really, that’s all we want to do when it comes to these things. So let’s get right to it, the music! 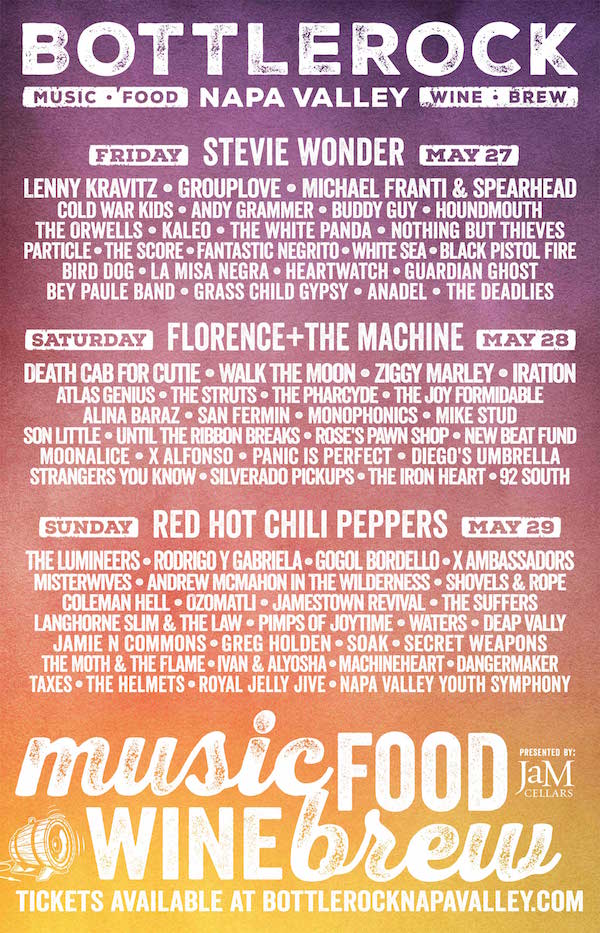 One thing that BottleRock was never behind the curve on was talent and location. The picturesque Napa Valley offers a beautiful backdrop for any festival setting, and the weather in the valley at the end of May couldn’t be better. It’s a great time to be in Northern California, and an even better time to be drinking wine, beer or a cocktail under the sun and stars as the summer days and nights start to take over. With that type of setting, Napa Valley has always delivered its best to BottleRock. In return the festival has put some of the world’s biggest touring acts on its stage. It was the likes of Jane’s Addiction, The Flaming Lips and The Black Keys that first caught our attention with the announcement of the inaugural 2013 lineup. That lineup was filled with talent from top to bottom. The 2014 lineup struck a chord once again with The Cure, Outkast, De La Soul and more. And while 2015 was our least favorite lineup of the three, there’s no denying the stage power of No Doubt and the musical significance of Robert Plant. As we look at the 2016 lineup, it is fair to say that the booking agents behind BottleRock have found their stride. The festival features one of the first shows for the Red Hot Chili Peppers in 2016, a world-class headliner in Florence & The Machine, and the legendary status of the one and only Stevie Wonder. If you are trying to pick three headliners that will appeal to just about anyone, then here you go. After that the festival is peppered with amazing acts, from reggae to rock & roll to indie. And that’s where BottleRock gets it right. The perfect blend of California sun embodied by the reggae and surf rock acts, mixed with international artists of every flavor.

BottleRock is sold out for 3 day passes, but you can still get single day passes for Friday and Saturday at the link below. BottleRock is growing and getting better every year, so be a part of the movement and see what all the fuss in Napa is about.