So it took us a few days to recover from the desert heat, long journeys of our Bay Area based writers, and to synthesize 6 days of music at Coachella and 4 nights of shows in Los Angeles in between.  We’ve finally did it and can present to you the Best of Coachella 2012.  We took input from out whole staff to put together this final recap on what was an unforgettable 7 days for the Los Angeles music scene.  Check it all out here!

Friday’s weather (Weekend 1) – After 7 years in attendance, some were getting a little tired of the ever-growing size and entitled attitude of the crowd. The weather chased away less fervent fest-goers, making for a more private and energetic experience all around. Yes, it was chilly, but nobody really cared as the music kept us fired up. Smaller crowds of more dedicated fans? Yes please! 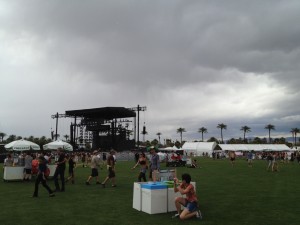 The rain scared away the non-music lovers which was a blessing for some.

Dragonette (Weekend 1) – Playing Saturday at 1:20 pm, the weather was perfect and Martina Sorbara couldn’t believe the size and excitement of the crowd that had gathered to start the day by dancing their faces off. She cried with joy throughout their entire performance, and that didn’t stop Dragonette from putting on an exuberant and memorable set.

The Hives (Weekend 1) – Tuxes, stupendous energy, hilarious antics, STAGE NINJAS?!?!?!???!!!!!! The crowd sucked but these guys made the best of it with a fantastic show. 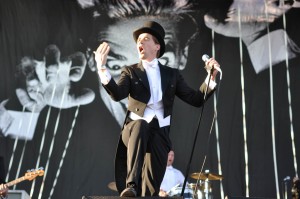 The Hives are always a party, even if the crowd doesn't fully understand that.

The Rapture (Weekend 2) –  I know I dogged “In the Grace of your Love” as the most disappointing album of 2011, but man, is The Rapture still a great live band. This reaction is probably colored by my low expectations for their performance, as I expected the set to be mostly new tracks. They did a great job balancing old favorites with just a few off their newest album. They hit some of my favorites, including “Echoes” and “House of Jealous Lovers,” and closed with “How Deep Is Your Love?” All in all, a great set. And seeing them in the Mojave tent again brought back fond memories of Coachella past.

Radiohead (Weekend 2) –  Their San Jose show was not our favorite, partially due to the set list. Although this tour’s production and stage set up is probably the best we’ve ever seen, it’s still about the music when it comes to Radiohead. Closing their two hour set with “Paranoid Android” was simply magical. We don’t know what spurred the changes in the set, but the “Kid A” and “Amnesiac” heavy selection was very welcome. We’re still a bit bummed that “The Bends” and “OK Computer” didn’t make as strong of a showing, but when a band has as large of a phenomenal repertoire as Radiohead, you’ll never get to hear every song you want. 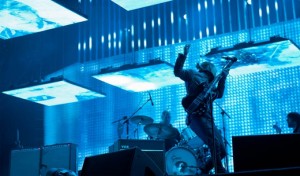 At The Drive-In (Weekend 2) – Playing favorites off more than just “Relationship of Command,” ATDI have not lost any of their stage presence in their time off. Having only announced a handful of festival performances, it’s unclear how long this station will be operational. If you were able to snag Lollapalooza passes before they sold out, make sure you check out At The Drive-In.

Kasabian (Weekend 2) – They started by throwing out hundreds of Kasabian branded LED light tubes to the fans.  They ended by throwing one of the most rock n’ roll parties of the weekend.  The whole place was singing along to each song, jumping in unison, and feeding off of the energy of lead singer Tom Meighan and guitarist/songwriter Serge Pizzorno.  This is what happens when a band cares about making their performance at Coachella memorable and unique.  The UK headliners gave it their all for a crowd 1/10th of the size they are used to in Europe.  Well done. 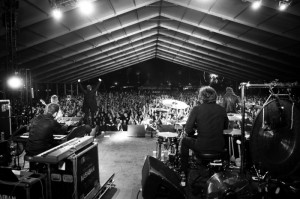 Security checks (Weekend 2) – Friendly security staffs that didn’t push the limit or boundaries of checking festival goers.  I’m sure more than a few people got hemmed up for bringing in “illegal” things to the festival, but from the experience of 20 or so people we spoke to, the security lines were fast and easy to get through.  It’s a music festival in the desert, and if you try to crack down on everything going on, it just wouldn’t be the same.  The security checks and actual police presence at the festival seemed tolerable and appropriate- that makes for a great festival experience for all.

Gary Clark Jr. (Weekend 1 & 2) – He knocked the crowd’s socks off.  Seriously, people were sock hunting afterwards.  An artist to keep an eye on, the bluesy set was entrancing and everyone took notice.  If there was one artist that people were talking about all week as a must-see it was him.  The buzz started after the Weekend 1 performance, and carried over to Weekend 2 where Gary Clark Jr. had a much larger crowd and at this point a new fanbase!

Alesso (Weekend 1 & 2) – The Swedish DJ doesn’t have the same name recognition of the members of Swedish House Mafia.  If the Swedish trio of Axwell, Sebastian Ingrosso and Steve Angello were to add another member, it would definitely be Alesso.  Alesso’s tracks were heard through the DJ tents at both weekends, with his high flying “Calling” being a staple of sets everywhere you went.  The best performance of “Calling” was given by Alesso himself during his amazing performances at Coachella. 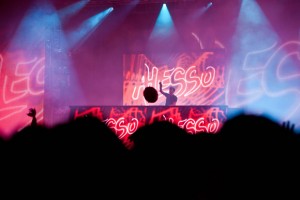 The house song of the weekend was Alesso's "Calling".

Honorable Mentions: Givers put on a great set, they’re definitely a band to watch. ~ Madness, Arctic Monkeys and Jimmy Cliff also did it up right on Friday. ~ Modeselektor with guest appearance by Thom Yorke at Weekend 2. ~ Flying Lotus. If you weren’t in the Gobi tent for FlyLo on Saturday night, you missed one hell of a party. Luckily, LA local FlyLo will be sure to pop up near you soon.