Banksy is full of surprises, isn’t he?  During the lead-up to the last Academy Awards, Banksy stirred some controversy with his billboard piece on Sunset Blvd.  That was fun!  Well, now Banksy is doing something cool in LA again- this time by giving you a chance to see the “Art In The Streets” exhibit at the MOCA for free on Mondays.

The Museum of Contemporary Art is currently hosting the graffiti art exhibit called “Art In The Streets”.  The exhibit is a unique look into the world of street art- much of which is done in an illegal manner and considered a crime.  Graffiti has littered or decorated (however you want to view it) the streets of LA ever since there were buildings and walls to use as canvas.  But to have street art displayed in the MOCA in this fashion is a pretty unique experience.  Billing itself as “the first major U.S. museum survey of graffiti and street art”, the exhibit is worth checking out.  Well, if the price of admission scared you away, Banksy is giving you absolutely no excuse (sorry, he can’t solve the traffic problem) to not see it.  Every Monday the exhibit will be free until the exhibit’s run ends on August 8th.  Banksy is picking up the tab for all of Los Angeles so you can get the chance to see some of the most influential street artists and pieces from New York, Los Angeles, San Francisco, London, and Sao Paulo.  Why is Banksy doing this?  In a statement on MOCA’s website, Banksy said:

“I don’t think you should have to pay to look at graffiti. You should only pay if you want to get rid of it.” 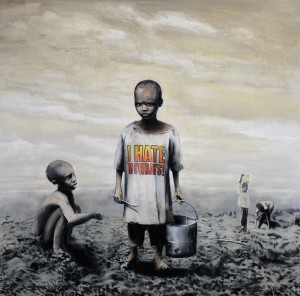 Tags: art in the streetsbanksyfreemocamonday