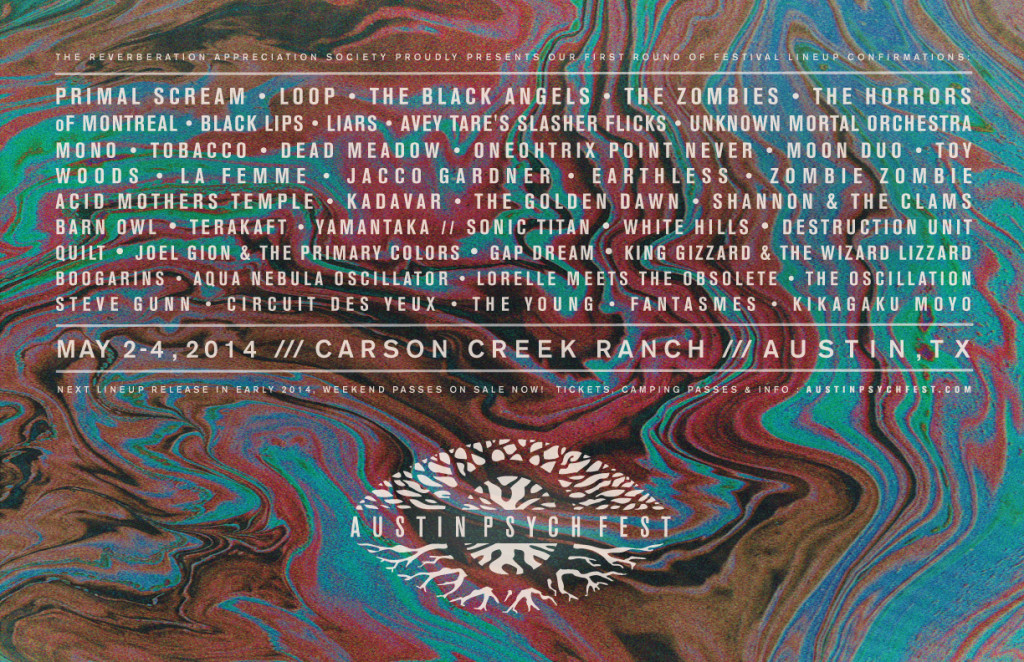 It’s never too early to start planning for NEXT year’s festival season! Right?

This is the time of year when we like to look back at all the great music, concerts, and experiences of 2013. But there is still plenty of time for that, right now we’re checking our brand new 2014 calendars, planning out “sick” days, and reminding friends and family that plane flights are #1 on our Christmas/Hanukkah lists. Instead of sugarplums dancing in our heads we have Coachella dancers, New Orleans jazz bands, and Miami BPMs.

Today the Austin Psych Fest got us in the festival spirit by announcing its initial 2014 lineup headlined by The Black Angels, Primal Scream, The Horrors, and the Black Lips to name a few. This will be the seventh annual time for APF, which is just starting to really establish itself in the increasingly competitive festival scene. In 2013 APF found a home at the scenic 58-acre Carson Creek Ranch, on the banks of the Colorado River, where they set up three stages and a campground for the weekend warriors. The festival is also just minutes from downtown Austin, which is one of the great live music cities in the U.S. and a selling point in its own right. Tickets, Weekend Passes, and camping are on sale here.

There isn’t a headliner in 2014 with the pull of 2013’s headliner Black Rebel Motorcycle Club, but the lineup is much deeper and features RB favorites The Black Angels.

The initial line up for the festival is below:

THE BLACK ANGELS (US)

SHANNON & THE CLAMS (US)

THE GOLDEN DAWN (US)

JOEL GION & THE PRIMARY COLORS (US)

There will be another round of lineup announcements in early 2014. The festival schedule along with day tickets will be available closer to the festival.