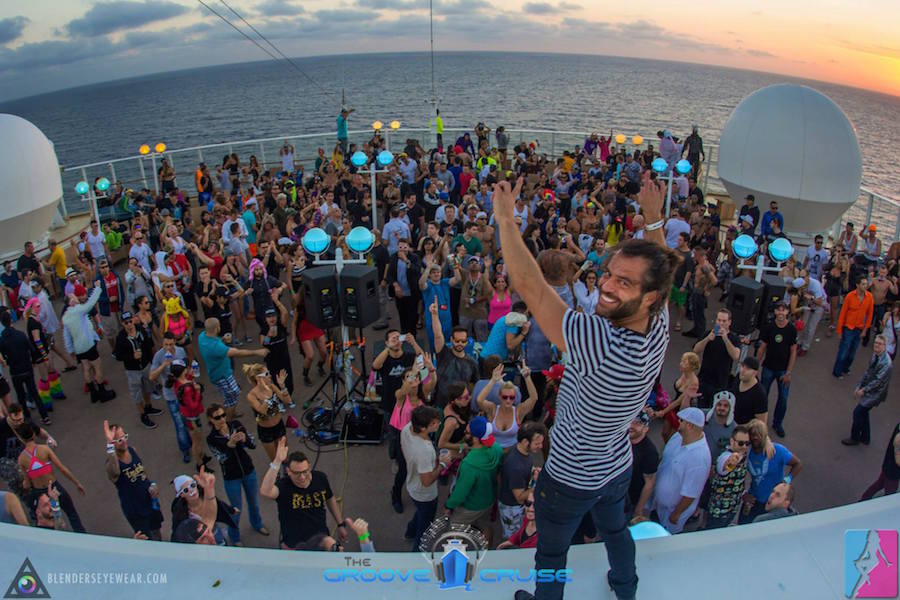 Anthony Attalla is having a damn good year… and January isn’t even over yet.  The founder and owner of the rising Incorrect Music label has already been around the world ten times, played sold out shows in Los Angeles and Bogota, Colombia, and still has found the time to make Chicago his new home.  While Anthony has kept to a busy touring schedule, the most important thing to him is to continue to bring happiness into the lives of others.  Whether that’s through music, an insane after hours party, or simply bringing people together under one roof, Anthony Attalla continues to entertain and innovate as both an artist and businessman.  We caught up with Anthony the day before the Groove Cruise Miami Xi to find out where all of those good vibes are resonating from!

Rabbits Black: You are just getting back from shows in Mexico, Colombia, LA and Seattle.  It’s been a busy 2015 for you already!

Anthony Attalla: It’s been an awesome year; one that’s very hard to sum up in words… just such a great feeling to be spreading so much joy and happiness.  I know that sounds cheesy but honestly I’m such an overly-focused person, I’ve realized that others happiness is truly what makes me happy.  So when I look back on this year it makes me smile to know that I had a small part in others positive outlook on life.

From a technical perspective it was quite the adventure… I flew over 200k miles for the first time which was kinda astonishing when you think going around the world is like 20k.  I was happy to keep growing but still have the burning voice inside of me that isn’t ready to rest on any laurels… too much more to accomplish!

Rabbits Black: We’ve noticed that after the Groove Cruise LA this past year, your popularity in Los Angeles has really grown.  You just finished a headlining night at Exchange LA and you already have Valentine’s Day booked at Sound Nightclub.  Do you feel the love coming from LA like we do?

Anthony Attalla: Sure.. but it has a lot more to do than just the music.  Of course that’s a huge part but I think the spiritual connection I’ve spawned with a multitude of beautiful souls over the last few years has really bled into their friends and created a wonderful and positive snow-ball affect that we can all feel among us.  It’s like a big family and when I play in LA it’s more a get together so we can all enjoy each others company… to great music of course!

Rabbits Black: The Groove Cruise Miami Xi sets sails tomorrow from the Port of Miami!  Over the past few years you’ve become such an important part of the musical experience of the cruise with your Incorrect Music label party being one of the most anticipated events of the week.  How did this all happen?

Anthony Attalla: Well to be honest (and I mean this with all do respect), I feel the obligation to carry the flag for a “different” kind of sound on the boat.  Years ago I seemingly was the only guy playing underground but everyone really loved it.  I pushed and pushed and pushed them to let me start my own party and they finally acquiesced two years ago.  We had a small party on the back of the boat from 3am until 10am with just myself and Cocodrills from Miami.  I played with these guys earlier in the year and saw how talented they were and knew right then these were my wing-men towards a Groove Cruise Musical Revolution (laughs)! But seriously, we threw this Incorrect event and it totally blew the fuck up!  No one could stop talking about how sick this event was; the people, the energy, the vibe… it was all just “right”.  So we did it again, and again, and again…. and now it’s not just one night, it’s all four nights from 2am-11am, under the stars, as the sun comes up over the ocean and into the morning.  I wanted to bring that BPM and/or Burning Man vibe to a cruise that was predominately for commercial acts and it worked!  Now with the help of the curator of the Groove Cruise (Jason Beukema) and lead talent buyer (Ryan Fitzpatrick), we’ve collectively created the most anticipated party on the boat… makes me a proud Pappa for sure!

Rabbits Black: Everyone remembers their first Groove Cruise… tell us about yours.

Anthony Attalla: You know I was so green at the time… it was 2008 and I had just quit my corporate job a year earlier so I was up for any gig; just trying to get exposure.  I simply loved my first Groove Cruise… I still to this day call some of those people I met on my first one some of my best friends!  It’s clearly grown immensely since then and it’s a lot different but one thing has remained the same… the people! Rabbits Black: We have to congratulate you on the undeniable success and rise of your music label Incorrect Music.  It’s fun for us to see a label like yours take off like it has in the past year.  We can only imagine how excited you are about the recent success of the label.

Anthony Attalla: Thanks so much for noticing… yes my baby is growing up!  Seriously I feel like a parent watching their child graduate high-school or something (laughs).  It’s been a long road but I simply applied all the principals I learned while having a successful corporate career to my label.  I knew it would take time, but I had systematic plans on where I wanted it to be at each specific stanza of it’s growth.  The proliferation of my career has also paralleled the upward trajectory of Incorrect and it allows me to have entities to push my brand and those artists I truly believe in.  There have been several learning experiences and epiphanies along the way, but that’s life; a wondrous roller coaster full of ups, downs, twists and turns!

Rabbits Black: What’s your process for finding artists and tracks for Incorrect Music?  What do you look for?

Rabbits Black: Incorrect Music is known for their amazing after hours parties and sets- something that breaks from the norm of big room EDM culture.  For those who haven’t experienced it, what is an Incorrect after hours party all about?

Anthony Attalla: Well it’s all in the name, isn’t it?  Incorrect reverberates with everyone that comes out to party… who the fuck wants to be “correct”… not me!  We go through our 9-5 Mon-Fri doing what we’re “supposed” to do… the “correct” thing.  But on the weekend we want to be “Incorrect”.  I’m incorrect, you’re incorrect… we all are; or at least we want to be.  So why not give them what they want; great music, mixed with healthy debauchery, and a dose of sexuality.  This is what the after-hour party encompasses.  Furthermore, our sound is deep, it’s techy, it’s soulful, and it’s sexy.  It’s not pop, bubble gum, let’s prance around in tutus and glow-sticks.  We’ll leave that for the EDM crowd and we’ll take our misfits to the after-party and get dark and dirty!

Rabbits Black: The big news for Groove Cruise Miami this year is that the Incorrect Music after hours party is moving from the back deck of the boat to the main stage pool area!  Is it a little bitter sweet to be leaving the back deck where it all began?

Anthony Attalla: Not at all (laughs)!  I’m excited!  I loved the privacy of our previous space but the masses have spoken and with the growth of the brand comes the desire to have more space.  Trust me I have no doubt the vibe and the energy will be insane and second to none.  Besides, this is all a learning curve and if I was ever afraid to try new things, I wouldn’t be here to begin with.  If it doesn’t work, big fucking deal then we’ll change it.  We’re all about vibe and the Incorrect Army is so strong that we could have the party in a fucking bathroom stall and it will still rock!

Rabbits Black: You just announced a collaboration with Downbeats, high fidelity sound filters, for Groove Cruise Miami Xi.  There will be special Incorrect Music branded pairs on the ship.  How did this partnership come about?

Anthony Attalla: I met the guys organically now that I moved from Detroit to Chicago.  Marco was a big supporter of what I was doing in the city.  He thought it was a fresh take and was great for the scene so we naturally just gravitated to each other and began a friendship.  It’s more a bunch of guys sharing ideas to help each other flourish rather than a compartmentalized business relationship.

Rabbits Black: Do you think ear protection is something that the dance music scene needs more education on?

Anthony Attalla: Yeah most definitely.  I’ve been friends with the owners of Etymotic here in Chicago for a few years and they gave me a lot of valuable info on hearing protection.  I feel that across the spectrum of music, not just dance music, the need for more education is important.

Rabbits Black: Did you always wear sound filters such as Downbeats or did you recognize the need for this later in your career?

Anthony Attalla: I definitely came to appreciate this later! Rabbits Black: We can’t let you go without saying how excited we are for the Incorrect Music after hours roster on the Groove Cruise Miami Xi.  Sharam- an absolute legend!  Teenage Mutants rarely plays in the US!  Cocodrills is back after an amazing set on Groove Cruise LA last year.  What more can we say?!

Anthony Attalla: Well, every time I put together an Incorrect label event, the artists need to first and foremost be on the label.  Equally as important, I never never never book an artist that I haven’t personally heard play live myself.  My incredibly high standards ensures that the music will be mind-blowing from beginning to end.

Thank you to Anthony Attalla for taking the time to speak with us days before the Groove Cruise Miami Xi sets sails on January 28th!  You can catch Anthony Attalla and all of the Incorrect Music artists all week on the cruise at their iconic after hours party.  Stay up to date with Incorrect Music on Soundcloud, YouTube and Beatport.

The 2015 Groove Cruise LA has just been announced!  Click here for more information.

[…] this interview Anthony Attalla did with Rabbits Black about Incorrect Music, the Groove Cruise, life, and hearing […]