Sometimes you discover a great band by turning on the radio and hearing the new single from the latest flavor in mainstream music.  Other times you may go to a show and see an excellent up-and-comer before the headliner takes the stage.  And sometimes you just take a chance and click on an obscure looking icon of what looks like the back of a mobile home that recently surfaced in your Spotify dashboard.  Sure, why not.

Though it has not officially gone on sale until January 8, I added this album in its entirely to my rotation about a week ago.  Since then it has repeatedly surfaced during my commute, at my desk, or as I study at home.  To be honest, I like this album very much, and while I was very tempted to give this album a glowing review, I think most people will probably gloss over it as a nothing-special indie record.  Perhaps the hooks aren’t catchy enough.  Maybe the electric guitar doesn’t sear chorus riffs into your head for the rest of the night.  It’s very hard to sing along to.  But it has soul, and elicits a feeling that I don’t get very often in most of the albums that hit the shelves these days.

Twistification is the brand new LP from writer/singer/producer Eric James and drummer Mason Ingram.  The Brooklyn-based duo, first formed in the Spring of 2010, deliver an 11-song LP that juxtapose tuneful, beat-driven indie-pop with the capricious electric Americana that defined millennium era glam-rockers like The Killers and Modest Mouse.  Indeed, it is a bit of old-meets-new, and may feel a bit nostalgic to those of us who grew up listening to those bands nearly a decade ago.  What it may be is a refreshing sound that could possibly inspire a new generation of listeners.

The album sets a good order to the songs, iterating the mostly upbeat lineup in with a couple mellower songs like “All Over Again” and the acoustic driven “I Hate California”.  It includes the final incarnations from their 2010 EP of “Crystal Vases”, “Always, to Belong”, and “Come Take My Hand”.  The songs are a good mix of guitar with pop-rock keys and groovy bass.  The mostly clean tone they have sounds minimally processed while being undeniably electric and energetic with a summertime vibe.  Overall, the mood of the album is upbeat and fun, but almost illusory in that sense.  The content of those bright and shiny songs contain introspective lyrics that will have you questioning the direction of your spirit by the end of the songs.  It is a bit like coming home to a quiet room after a night on the town.  It is an album that wants to have fun, but let’s the realities of life seep in around the edges.  Eric James laments, “We’re swapping stories on the phone / missing you in your time zone / I’m losing sleep and I’m waiting for a bed of my own…” (from “I Hate California”)  Twistification is cognizant of the unique challenges of our generation.   That even with the technology and conveniences of the 21st Century, it may be harder than ever to forge true connections and meaningful relationships with other people.     It’s an album that, in spite of those challenges, hopes for something better.  The somber words combined with the sonically optimistic tunes allow one to reflect on the duality of modern living.  While all the songs are relevant, they may struggle to remain interesting for most listeners.

In the end, Twistification may not be groundbreaking, and it may just be the misfortune of arriving on the scene a decade too late, but that does not take away in my mind that it is a good debut LP, a spring-off point to the summer music festival season.  There is no denying that as musicians they have a proven formula.  What James and Ingram do on this album, they do with impeccable quality, intention, and energy.  They definitely have soundtrack potential and will probably get some decent airplay on college stations.  But like I said earlier, it is in a style that is, dare I say it, played out?  Their ability to hold the attention of the audience will either propel them into the spotlight or be their undoing.  I could see it going either way.  Keep your eyes peeled for The Last Royals on small-stage lineups during the upcoming music festival season.  If they can prove their mettle in a live environment this may not be an act you do not want to pass up.  Until then, I would call Twistification a must-download album for the casual listener, and a must-buy album for those of us that just miss the music of of early 2000’s that much. 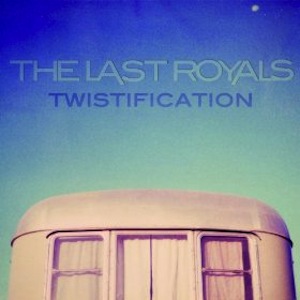 ~ Thoroughly enjoyable, but maybe only for a niche market of listeners that appreciate a now-decade-old genre.  If you have the patience, it gets better with every play.

This author hasn't written their bio yet.
Sergio has contributed 3 entries to our website, so far.View entries by Sergio