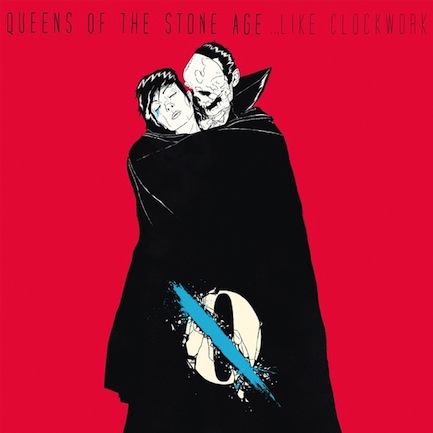 It has been a bit of a wait since the last psychedelic wave of new and awesome heavy riff California desert rock has penetrated the sound barrier; the better part of the last 6 years to be exact.  While us die hard Queens fans obviously freaking loved the re-release of the original 1998 QOTSA album and tour in 2011 along with the experimental all-star party that was Them Crooked Vultures before that, and some of the best television ever with Bourdain on “No Reservations” in between, we have really all been wondering what the hell has been going on since. Well, as expected, Queens of the Stone Age has not disappointed. The front man’s front man, Josh Homme and the ever evolving QOTSA line up have once again delivered another gem that will surely transcend this generation of great Rock’N Roll…Like Clockwork.

For all of you that have living under falling meteors from the Russian sky, where there undoubtedly is some pretty crazy space rubble to be polished, there has been some sweet build up to the release of …Like Clockwork . A series of animated videos created by the work of artists Boneface and Liam Brazier have been popping up one by one on the web over the past few weeks depicting some sort of twisted, dark, bloody, and overall creepy scenes of a monster filled wasteland with fresh cut tracks from QOTSA as the soundtrack.  5 of the albums 10 tracks (some not in their entirety) are featured in the story that culminated in a full length 15 minute short film stringing the individual scenes together. Needless to say that Queens fans worldwide were salivating over these things like you would for a six pack of cold beer and a pool party on a hot day. Check out the first of these awesome vids in You Need This feature of Rabbits Black and the full length version here:

As for the album itself, it is a change of pace from legends like Rated R and Songs for the Deaf and instead swings more toward the 2007 release Era Vulgaris in its overall ambiance. It starts off with “Keep Your Eyes Peeled,” a heavy, low, and bulky bass line laced with melodic keyboard that echoes the song from Homme. Next is “I Sat By The Ocean” that follows more of the traditional Queens sexy dance track formula. Classic QOTSA guitar hypnotism coupled with pitched Homme vocals and a rhythmic dance beat. The middle of the album features tracks like “If I Had a Tail” and “My God is the Sun,” two of my favorites on the album. “I Appear Missing” and the album’s title track “Like Clockwork” round out the top, and only, 10.  One thing I would have liked is more tracks, of course.  10 just seems a little low for a 6 year QOTSA research and development project. I would not have expected a double disc or anything, but 13 or 15 solids would have been great.  Check out the album here .

I can’t lie, the first dozen times of running through the early releases,  I really didn’t know how to feel aside from stoked that QOTSA was putting out new stuff. Although I really liked tracks like “I Appear Missing,” “Keep Your Eyes Peeled,” and “My God is the Sun,” I was just not sure if the sound truly encompassed everything I have come to love about this band. The tempo just seemed to have changed drastically and I was questioning whether or not this stuff would translate into the epic live QOTSA shows that we all have been spoiled rotten with over the years. So, you can imagine my brief skepticism among other head popping excitement when the band announced a pre-album release show at the LA Wiltern Theater. I won’t go into too many details, but let me just say this…it was worth every single dollar and foregone brain cell to make it to that show even though it was streamed live from beginning to end on NPR. There is really nothing quite like Josh Homme and the gang on stage and in-person. The new stuff sounded freaking awesome and the 23 song set had plenty of the classics intertwined. Good news is that the band will be touring in concurrence with the formal release of the new album (June 4th) this summer and fall. GO SEE QOTSA LIVE!!

~ Overall, this album ROCKS, but I am still getting used to the change of pace. I am sure it will get better with time…Like Clockwork.

3. The Vampyre of Time and Memory