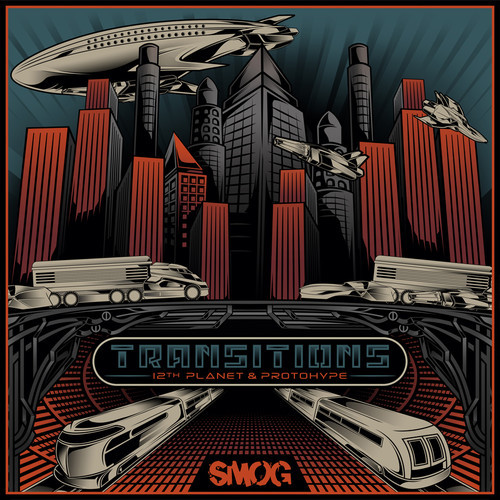 Bar none, the highlight of last year’s Electric  Zoo Festival (besides avoiding any drug-related tragedies of the sort that led to the third day of this year’s event being canceled) somehow wasn’t any of the regularly scheduled performances held on Randall’s Island, but rather a modest headlining performance by LA-based producer 12th Planet at an official after-party that took place at the Best Buy Theater following the event’s opening day.  Perhaps it was the intimate setting, or the dialed-in sound mixing, but for those who were fortunate enough to catch second wind and ignore the little voice telling us to pace ourselves for a long weekend ahead, 12th Planet made sure to reward our collective act of willpower with what I can only describe as a “seismic” performance capable of waking the dead.  And given that I was on my 14th hour of dancing by this point, I’m willing to bet I resembled something straight out of a George Romero flick.

Hence, why I was ecstatic to hear that John Dadzie, the man behind the ballistic beats of 12th Planet, teamed up with another rising star, Protohype, to release a new EP, Transitions, just in time for Halloween.  The duo’s choice in naming the EP couldn’t be any more spot on, considering each of the four tracks undergo a dramatic (or, to recycle an adjective already used, “seismic”) shift of some sort roughly halfway through – and in some cases, traverse between sub-genres entirely.  Due to the short length of Transitions, I can describe each track in depth.

You can stream the entire Transitions EP on Soundcloud here.

The introduction of first track, billed as giving a “Bay Area hyphy vibe,” eventually gives way to a through-and-through trap beat at the first drop.  The tempo is laid back, but by utilizing a thoroughly popping kick drum set underneath a series of heavy sawtooth bass accent notes, there remains a consistent level of intensity throughout.  During the buildup to the second drop you know something major is about to happen, and just like that, the first “transition” occurs: the tempo increases and drums engage in a breakbeat pattern, changing the entire mood of the song.  Indeed the latter half of “Paper” is a classic rendition of drum and bass music.  Although definitely not the biggest banger of the EP, this tune provides a solid foundation for what’s to come.

Probably my favorite song overall, this little ditty has a lot going on right from the beginning.  A slow, sinister buildup immediately launches the song forward, only to a false drop, and in place of the huge sound you expected to hear is a playful, almost radiant synthesized melody scaling several octaves.  It’s like when you first depart the staging area on a rollercoaster – you’re excited, not yet nervous.  It isn’t until you feel the cart latch onto the belt that brings you to the top when that exuberance you were feeling starts turning into a slight case of anxiety, because you know what follows the peak: the drop.  And “Brick” throws you head first over that hill into…a new metaphor: the jungle.  Welcome.  We’re talking about massive snares with tailing white noise that really never dissipates, set behind syncopated percussive notes is tribal to its core.  Even Knife Party’s “LRAD” (really the only comparable song I can of) doesn’t quite attain the same Congolese vibe we’re talking about here.  And this is subdued compared to what follows: after rehashing the bright synths through the second buildup, the next drop sequence is what I can only imagine was playing in Indy’s head when he first laid eyes on the Temple of Doom, or perhaps that other guy’s while he was ripping hearts out with his bare hands. The screeching, distorted synths are ferocious in tone, and the vocal sampling of the word “Brick!” (though it actually sounds more like “break”) compliments the chaotic, juiced-up audio being tossed around it.  This is truly a massive song, and well worth at least one listen.

The lone dubstep track on Transitions, “Shady” is a slow burner, and familiar territory for 12th Planet, who cut his teeth as a producer in the genre (long before it became a favorite of the mainstream).  Evoking the image of “lasers in outerspace,” what really stands out on this track is the beautifully eerie female vocal sample, which unfortunately is used but briefly in each of the buildup sections and doesn’t actually involve any words (but rather vowel sounds).  The “yah” synth sound, which makes its debut at the 1:17 mark, is a bit played out at this point – and honestly was years ago – but I can let it slide since it sits well in the mix.  While far from disappointing, there really isn’t a whole lot it adds to the EP either.   Even the transition seems a bit on the lazy side, as it merely increases in tempo without incorporating any new layers of sound or drum elements.

Stinky, which is classic drum and bass from start to end, is a near perfect finale to the EP.  It uses an undulating bass line and trilling hi-hats, which combine to keep the overall feel pretty frenetic.  The transition is what makes this jam so amazing though – halving the tempo for emphasis, the industrial bass line hits like a sledgehammer.  Normal dancing here seems too weak; moshing would be far more appropriate.  Once the hi-hats reemerge you just want to jump out of your seat and break stuff, but thankfully the beat dissipates and you come back to your senses.  You’re sweaty, and unsure exactly what just happened, kind of like a night-turned-tomorrow-morning in Vegas.  As the beat grinds to a halt, you might notice that the tempo is exactly the same as the beginning of the first track, “Paper”: despite all the transitions, we’re right back where we started.

Overall, I give Transitions a 3.5 out of 5.  While the sound design was relatively safe, I really liked how each song morphed so drastically at the second drop, which is, in my opinion, a great display of ingenuity.  For a total running time of just under 16 minutes, you are more or less getting 8 tracks, and that’s a lot of bang for your buck.  I would love to see more out of these two maestros of dub, and seriously cannot wait for the next opportunity to see 12th Planet live.  Stay tuned for tour dates.