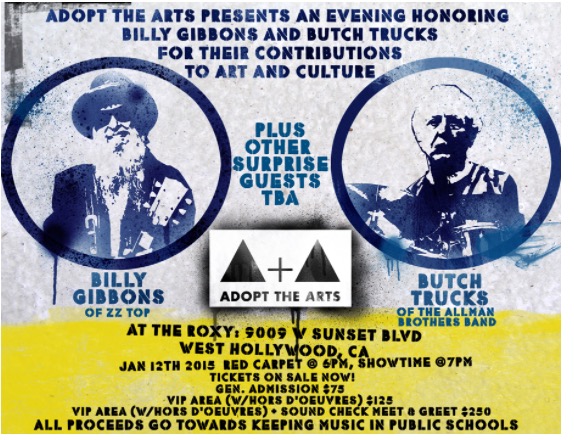 Rock N Roll history took place on Monday, January 12, 2015 at The Roxy in Los Angeles. For one night only, legendary musicians graced the stage together to put on an epic show honoring Billy Gibbons (ZZ Top) and Butch Trucks (Allman Brothers Band) for their extensive contribution to art and culture. The night also served as the annual fundraiser event to support Adopt The Arts, a foundation that brings together well-known artists, public figures, entrepreneurs, policy makers, and the general public to save the arts in America’s public schools. This show is one for the books, y’all and we were lucky enough to witness it go down.

Matt Sorum, ex-drummer from the iconic rock band Guns N Roses, Velvet Rolver and is now with King of Chaos is a co-founder of Adopt The Arts. Sorum victoriously collaborated this eventful one-night-only benefit concert/live auction. An array of the most legendary musicians all came together for this spectacular gala to support the cause that is true to their hearts and rocked it out hard all night. The sold out event kicked off the night by all the stars strolling on the red carpet for their grand entrance stopping to pose for the flashing cameras. Fans were also able to walk the red carpet and take photos with the artists as they arrived to celebrate the festivities.

Doing a little double dipping, serving as host of the evening and playing on drums through out the night, thanks to Matt Sorum, he was able to make this extraordinary event take place that will be cherished forever. Honoring Billy Gibbons and Butch Trucks, the vast array of iconic musicians all performed phenomenal covers of these two honorable rock legends.

Billy Gibbons, best known as the guitarist for the American rock band ‘ZZ Top’ and their traditional boogies blues rhythm, Gibbons was dubbed as the industry’s “Great White Unicorn”. The extensive successful musical career of Gibbons dating back to the late 1960’s has been quite the accomplishment of over an intensive span of over 4 decades, and still continues strongly. ZZ Top was inducted in the Rock and Roll Hall of Fame in 2004 and Gibbons charted at No. 32 on “Rolling Stone’s” list of the Top 100 Guitarists of All Time.  ZZ Top’s unique sound is a trademark of blues-rock and their style is instantly recognized by their signature look of chest-length beards. Jimi Hendrex has stated that Gibbons was his favorite guitarist of all time. ZZ Top is widely known for their monster classic hits, such as: Legs, Bad to the Bone, Gimme All Your Lovin, La Grange and Sharp Dressed Man.

Butch Trucks, famously influential drummer of the acclaimed American rock band, ‘The Allman Brothers Band’ was also an honoree of the night. Trucks is well known for his distinctive rhythmic drive that consists of blues, jazz and country music. Trucks’ powerful beats completed the ‘Allman Brothers Band’ that was formed in 1969. He continues to record and perform with the ‘Allman Brothers’ to this day. No stranger to success, ‘Allman Brothers Band’ has been awarded an astonishing eleven gold and five platinum albums, was inducted into the Rock and Roll Hall of Fame in 1995 and “Rolling Stones” ranked them at No. 52 on their list of 100 Greatest Artists of All time in 2004. Popular hits include: Statesboro Blues, Stormy Monday, Whipping Post and Midnight Rider, all of which was performed for the tribute show at The Roxy. With huge names, massive talent and humble egos, rock and roll blues, undoubtedly was at its finest! Sharing the spotlight, alternating turns with mind blowing shredding guitar solos between Slash, Richie Sambora, Duff Mckagan, Steve Lukather and Billy Gibbons on stage together performing ZZ Top’s classic hit ‘La Grange’…simply epic. Billy Gibbons wowed the crowd with his sultry saxophone and guitar solos. The crowd sang along word for word throughout the night to all the greatest hits of ‘ZZ Top’ and ‘Allman Brothers Band’. Powerful duets between Richie Sambora and Orianthi had the crowd mesmerized with their dynamic chemistry on stage. All eyes were glued on Slash, as his dominant stage presence was effortless shredding on the guitar. The magnitude of talent and rock history that took control of the stage at The Roxy is endless.

Giving the musicians a brief break, a live auction took center stage. Some items that were auctioned off were signed rock memorabilia of the performing legends such as: signed personalized guitars, never been released autographed photographs taken backstage and at sound-checks, signed drumheads and more, including a trip to Mexico. All proceeds go to Adopt The Arts, founded in 2011 by Matt Sorum and activist Abby Berman, which have worked profoundly with the LAUSD School Board and State Legislators serving as advocates of the arts in school. The initiative of the foundation is to preserve art programs in public school, programs that are essentially the first to be eliminated with budget cuts.

A surprise treat saved for the sweet last was when the talented Layla Brooklyn Allman (daughter of Allman Brother Band’s Gregg Allman) took to stage to belch out her vocal chops alongside singer Franky Perez for the grand finale of the night, while all the epic musicians united on stage at together to perform an unforgettable cover of the Allman Brothers Band blues hits, ‘Whipping Post’. It simply was a rockin night of music!

For more information on Adopt The Arts, please visit: http://www.adoptthearts.org/