Lollapalooza is consistently one of the premier music festivals in North America.  With it’s unique location at Grant Park in the heart of Chicago, Lollapalooza is one of the only major music festival in the country that actually takes place within the true metropolitan area of a major city.  With rockstar visionary Perry Farrell of Jane’s Addiction as the founder and organizer of the festival, Lollapalooza has always attracted an eclectic mix of rock, electronic, and indie.  Lollapalooza was friendly to the Electronic Dance Music scene way before many of the festivals that now embrace it.  On a yearly basis Farrell recruits arguably the best headliners of any festival.  This year is no different, with the state-side return of Nine Inch Nails, Mumford and Sons, and the only summer festival appearance by The Cure.  Lollapalooza is a must-attend for music fans around the country, but how can Californians make it out to Illinois to get in on the fun?  We have everything you need right here in our guide for Californians traveling to Lollapalooza.

There’s really only one way to get to Chicago boys and girls, and that’s by air.  Luckily quite a few airlines operate non-stop flights to Chicago.  From both Los Angeles and San Francisco, it is 4 hours of air time there and 4 1/2 hours in the air back.  Keep in mind Chicago has two international airports.  O’Hare is about 18 miles away from the city’s center and Midway is a little over 11 miles away.  We suggest Midway (less crowded and closer to town) if you can make it happen, but you really should just go with whichever airline you prefer or the cheapest rate.  Here’s the best options available to you:

From SFO to ORD (O’Hare)

From LAX to ORD (O’Hare)

Other options are Southwest which flies to Midway and also Virgin America.  Both fly non-stop.  Avoid Spirit Airlines.  They seem cheaper than the other airlines, but they will nickle and dime you for even the most basic services- not worth the hassle. 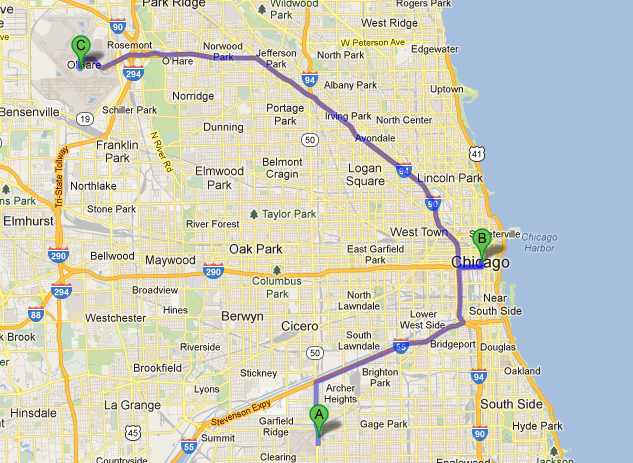 O’Hare and Midway are close enough to shuttle or take a taxi, but you don’t want to stay that far out of town.

With Lollapalooza taking place at Grant Park in the heart of the city, it is going to be hard to come by cheap hotel options.  The cheapest hotels of a reputable name are out near the O’Hare airport, but that puts you at least 8 miles outside of the city.  Chicago is such an awesome city to be in that you really want to stay within the city limits.  Hotels are going to cost you around $200-$250 a night, but if you can get two beds in the room and you split that 4 ways (or 5 or 6!) then you are looking at about $70 per person per night.  Here’s two recommendations:

Currently available for $197 a night.  This hotel gets you below that magic $200 a night number that will make you feel way more comfortable about your budgeting.  It’s also a reputable brand and nice hotel, but the location is really where it’s at.  The Miracle Mile area is Chicago’s premier shopping district and there are a ton of bars in the nearby State Street area.  It’s only a 1.5 mile walk to Grant Park from the hotel or cheap 5 minute cab ride.

Another brand name and right at the $200 mark.  The Sheraton has a pool for relaxing during the da, and is a brisk 1.4 miles to Grant Park.  A business hotel, but that doesn’t mean you can’t get rowdy at nearby bars until 4 AM.

The Congress is one of Chicago’s most popular hotels for Lollapalooza.  It is located directly across from the festival, and at less than $150 a night is a budget dream.  There’s one problem, it tends to sell out fast, and don’t be confused, this is a 3 star hotel at best.  If you don’t mind some older accommodations, and if you can get a room booked, you can’t be closer to the action than the Congress.

It’s hot at Lollapalooza, but it’s not overpowering like the sun in Indio at Coachella.  Temperatures can get up to 90 degrees during the day, and don’t expect it to drop below 80 until possibly nightfall.  It’s not the heat that will kill you, but the humidity.  Us Californians don’t have humidity like the mid-west so get ready for it!  If being at an all-day music festival already makes you want to pack twice the amount of clothes, add another three or four shirts because you are going to soak through them.  The festival organizers do a good job of offering unique ways to cool off, so don’t worry too much.  Just be prepared!

The Cubs are in town!  Now between you and I, we both know the Cubs are horrible this year, but that’s not why you are going.  Wrigley Field is one of the world’s most famous stadiums in all of sports, and a trip to Wrigley is highly encouraged for any sports or beer lover.  The neighborhood outside of the baseball park is called Wrigleyville and it’s Americana at its best.  Hot dogs, beers, jello shots, and baseball fans.  Wrigley Field is 7 miles south of Grant Park.  It’s really on the other side of town, but the convenient Chicago metro will take you there easily.  And for fans coming from Los Angeles, guess who is in town to play the Cubs?  The Dodgers!  Seems too perfect, right?  There is a game everyday starting on Thursday, so we suggest the Thursday game or Friday game (depending on the start time) so you don’t miss any of the great bands playing at Lolla. 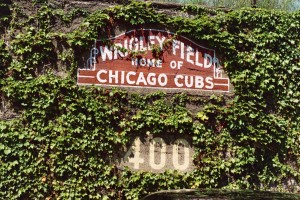 If you have the time, catching a game at Wrigley Field and bar hopping in Wrigleyville is highly recommended.

Drink all night- because you can!  Nothing sucks more than being kicked out of the bar at 1:45 AM in California.  You are lucky to find anything open past 2 AM in California besides a DUI checkpoint.  In Chicago you can easily walk from bar to bar or cab to different parts of town in less than 5-10 minutes.  Don’t feel like you need to rush, bars don’t close until 4 AM in Chicago.  State Street is our favorite for cheap drinks and easy going bars.  I know, it keeps getting better in the Windy City!

Everyone knows about the Sears Tower (now known as Willis Tower).  It is currently the tallest building in the United States and boasts 110 floors.  But we like a slightly smaller tower better- the John Hancock Tower in Chicago.  At 100 floors less than the Willis Tower, the Hancock is the 6th tallest building in the United States, and the 3rd tallest in Chicago.  But the Signature Lounger on the 96th floor is our favorite high elevation bar in the United States.  Yes, it is expensive and gimmicky, but it’s awesome to sit along the window on the 96th floor with a Manhattan or bottle of champagne and look out over Lake Michigan and Chicago.  The Hancock tower is walking distance from the Crowne Plaza that we recommend above. 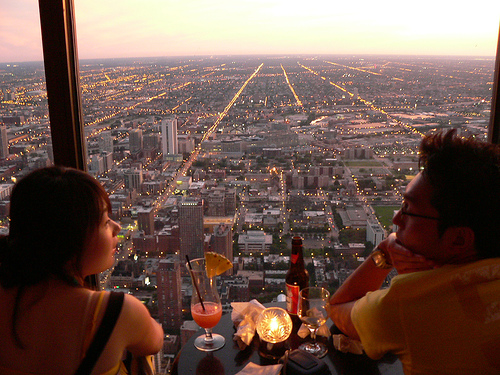 An aggressive start to the evening if they are staying out at local bars until 4 AM. We like it!

That’s it for now!  We will be updating this page continuously as Lollapalooza gets closer.  We’ll even have a guide to getting tickets since all of the general on-sales are sold-out.  Regardless of how you get there, or where you stay, Lollapalooza is shaping up to be one of the best festivals in the world this year.  Stay tuned for our Lollapalooza Primer that will feature 10 must-see bands in the 2013 lineup.