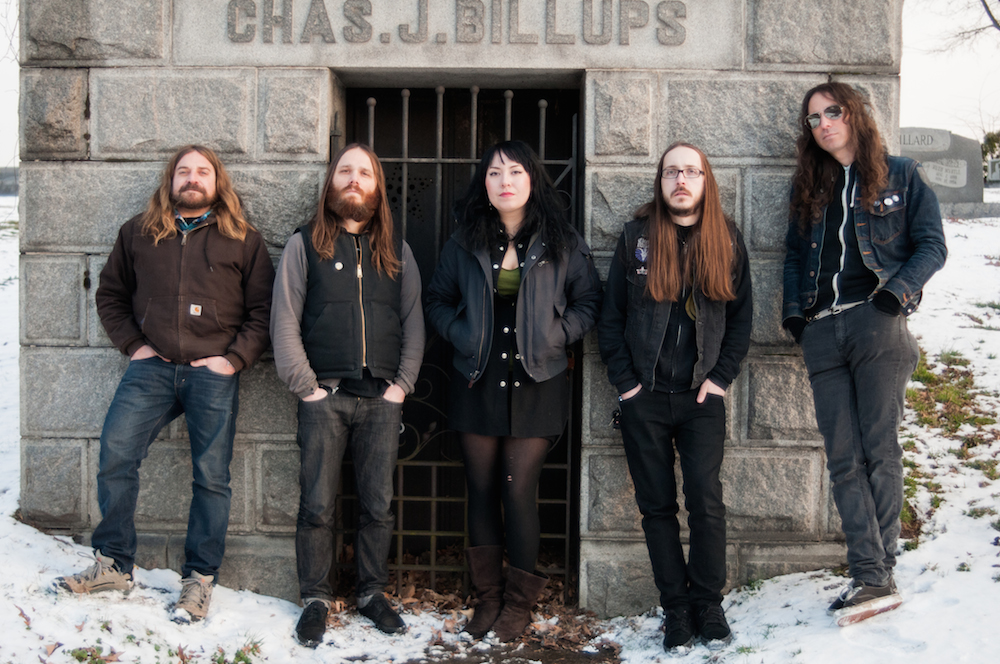 Day Of The Shred will bring 18 bands to Southern California this Saturday to celebrate Dia de los Muertos at The Observatory in Santa Ana.  Festival curator Thief has brought together some of the heaviest bands around that will haunt and stay with you forever.  Every band has earned their place amongst the lineup that is Day Of The Shred, but the band entering with the most hype and buzz surrounding them might just be Windhand.  With only two albums under their belt, Windhand has taken the metal and doom scene by storm.  Rolling Stone took notice in 2013, proclaiming the band’s sophomore album Soma as one of the best metal albums of that year.  The time for Windhand is now, and their performance at Day Of The Shred should be their next step in metal dominance.  We caught up with vocalist Dorthia Cottrell before the festival this week to find out what all the hype is about.

1) The band is enjoying a ton of great press right now.  Was there a turning point in the last few years that got you here?

I’m still not even sure, we are constantly surprised and grateful for the consideration that we’ve been shown. But I’d say touring with High On Fire was definitely a highlight being that we have all been big fans of everything they’ve done since well before Windhand was a band.

2) Windhand is from Richmond, Virgina.  What is the one place in the city we have to check out when visiting?

The James River is beautiful and has been the heart of Richmond since before the Civil War. When I think of summers in Richmond so many good memories involve it. There’s such variety of places to access it as well, some very calm and sparsely frequented and others jam packed all through the spring and summer months, so there’s a suitable place for you no matter what your personality or preference may be.

4) Soma has been getting praise from just about everyone.  How did this album come about?

A lot of the songs started out on the acoustic guitar. Garrett recorded it in our practice space as he has done for all of our recordings up to this point. We were all going through a lot in our personal lives at the time and I’m sure that influenced and informed the songs that were written.

5) What album have you listened to the most in your life?

Ryan really wanted to answer this one so here it is…

Led Zeppelin 2. I used to always listen to that album and play TecmoBowl on Nintendo as a kid. I went home to my parent’s house for Christmas when I was 21 or so and got really stoned and wandered back to my room, bored and without much entertainment I started playing TecmoBowl and Zeppelin 2 started playing in my head.

6) Five years from now, what is the world saying about Windhand?

7) Why Day Of The Shred of all festivals to play?

Evan from Thief came to us about playing and honestly we couldn’t really say no. LA has been really good to us and throw in seeing friends from Red Fang, All Them Witches, Graves At Sea and Daniel Hall from Riding Easy Records, it was a no-brainer.

8) One word to describe each band member.

9) Do the dead continue to exist in the world of the living?

From what I have experienced and/or read about, it doesn’t make sense to me personally that someone’s consciousness can exist after death in that particular way, but who really knows, science is magical and people know hardly anything at all.

10) One thing everyone attending Day Of The Shred should do this Saturday at the festival?

Go see All Them Witches!

Windhand will be performing on The Reaper stage at Day Of The Shred at The Observatory in Orange County on November 1st.  A limited amount of pre-sale tickets are still available at www.DayOfTheShred.com

Tags: Day of the ShredWindhand